Amazing how quickly the time passes, even while doing office work. Since my last entry I’ve been really focusing in on bumblebees (once known as humble bees), learning as much as I can about their foraging patterns and habits. The overarching conclusion I’ve come to is that they can fly really far! For such a small animal, it is incredible to learn that some individuals will fly upwards of a kilometer each time they leave the nest in order to reach some really delicious nectar.

I read a cool study that quantified bumblebee foraging patterns by attaching tiny radio transponders to their backs. Check out the pictures! Osborne et al. (1999) set up a giant satellite dish in the middle of a field, and used harmonic radar to see where the bumblebees went. They ran into a few problems though, because the signal was only strong enough if the bees stayed within 700 m and were in sight of the satellite dish. This is only one way that researchers have tried to determine how far bumblebees fly between their nests and their forage, though it may be the most interesting and innovative! 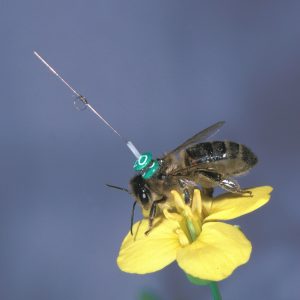 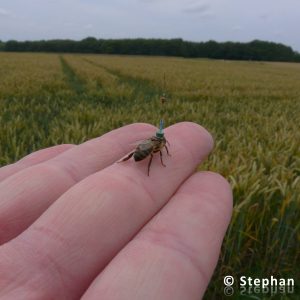 If you are interested in learning more about bumblebees, I would highly recommend Bumblebees: Behaviour, Ecology, and Conservation by Dave Goulson.