One night I received an email saying that I would be helping build a fence the following day. I envisioned your typical field fence made of metal stakes painted green and barbed wire and I thought, “that will be fun”. I was not wrong in thinking this, but I was wrong in what my vision of a fence was. Our team was presented with 7 large pipes that required a deep breath and clenching of every bodily muscle for them to be moved off of the trailer. In addition to that, our shovels were met by stubborn bed rock when we started to dig the initial holes. We each became very familiar with our friend, the auger, as the bedrock presented itself like an angry bouncer at a night club. Our friendly co-worker suddenly became like a slave-driver as he demanded holes two feet deep. I soon realized that the auger was no match for such stubborn bedrock and had to resort to a steel bar that looked much like an over-sized flat-head screw driver. As I drove it into the ground, breaking up small chunks of rock at a time, I started to feel like a clumsy archaeologist, fumbling toward a reward… only my reward was an empty hole… and what a beautiful empty hole it was when it was complete! After smothering all of my hard work with cement we had one pole in place! And only 6 more to go. 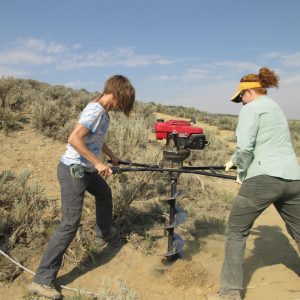 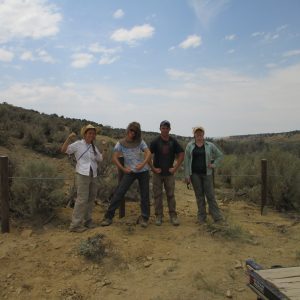 But I suppose I should mention that this project was not just for fun on a Monday, our aim was to protect Physeria congesta habitat, of course! This made me think of Dean’s presentation at the end of our workshop in Chicago; similarly in this location, four-wheelers were romping up an old road where P. congesta had colonized. The old road was hanging on to two tire tracks that could be seen from a distance and apparently, were calling to weekend riders. Now that the fence is in place, our threatened friends, P. congesta can spread their seeds without being crushed.