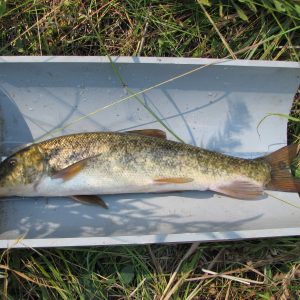 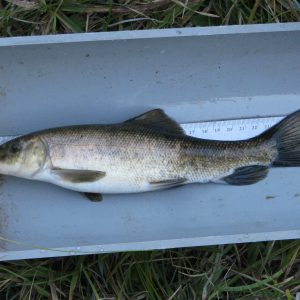 We packed all our gear into USFWS’s largest truck – a Dodge Ram. We had two electrofishing backpacks, waders, nets, 16 gallons of water, and four girls’ worth of camping gear and food. Needless to say packing the truck was a bit of an art. So off we went, the project biologist leading the way in a sedan and the Ram following close behind. The trip was about 2.5 hours, only one hour of which was on paved roads. From there it was an hour and a half driving on dirt roads to a campsite and nearby survey areas. We were conducting presence/absence surveys for endangered suckers (Lost River, Klamath Large Scale, Shortnose) in along streams in the Clear Lake portion of the Modoc National Forest in California. Our supervisor showed us the survey sections on the map with a general idea of site priority, showed us where we should deploy our two sondes (named Curly and Moe), then turned around and drove back to Klamath Falls, Oregon. And so we camped the night amongst coyotes howling and owls hooting overhead and started surveying the next day.

The first section we managed to electroshock successfully and most of the fish were Dace and the beautiful and brightly colored Green Sunfish. We pretty quickly realized pretty much all of our patched and re-patched waders had holes in them. But we caught a few juvenile suckers. For each pool that contained suckers, we mapped and took depth measurements – which, in the absence of a meter stick, involved myself wading across the sometimes deep pools and yelling out where the water came up to (2” above knee! Crotch deep! Brr I’m wet now). Then we reached much larger, deeper pools which were much more difficult to shock effectively. The fish would feel the shock and swim away before we could stun and/or catch them. Many pools were too deep for our (leaky) waders and we gave up part-way. Then we reached a wide, waist deep pool and by shocking along the edges the girls caught a large fish which was – Eureka! A sucker! We hadn’t expected to catch such big guys out here and it was super exciting.

The next few days of surveys yielded many Scaulpin, bullfrogs, and more difficult survey conditions. Our last survey site contained large, deep pools with descent size fish that we suspected were suckers, so we employed as many tactics as we could think of to catch them – we tried herding them to one side of the pond and then shocking, we tried leaving the probe in the water and waiting till they were close and then shocking – but this tactic was not particularly successful; they swam as soon as you pushed the trigger. In the end we managed to catch a few through a combination of herding, sneak attacking, free netting and pure luck. We did catch some more big suckers and the biologists at USFWS were pretty thrilled – their presence was unknown as far up the streams as we caught them. We were not so excited about backpack electroshocking in leaky waders.