We pulled out of the field station and headed west. As we drove, various peaks distinguished themselves. Mt Shasta looked menacing even from our distance, and Lassen’s snowy peak seemed to be begging me to come explore. We passed a sign that informed us that the small path through the grass was in fact the Pacific Crest Trail. Soon after that, we pulled onto a narrow dirt road which led us to a large meadow. Our tour guide, my boss Mike, informed us that this meadow was covered with a collection of shallow vernal pools which were just beginning to dry up after the wet winter months. We stopped when the road ended in a pool that had not yet dried up, and got out to take a closer look. What had appeared to be a field of grass was actually filled with tiny flowers. They were white, purple, yellow and pink and most were smaller than a pencil eraser. 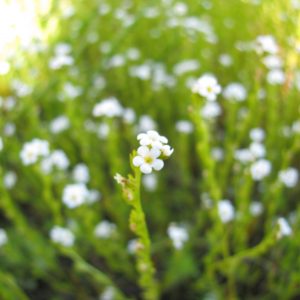 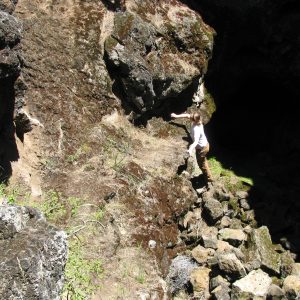 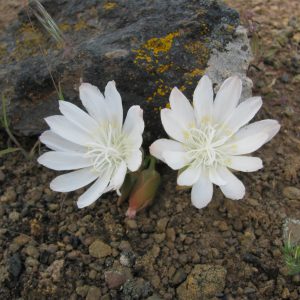 Since the water blocked the road to our original destination, we turned around and got back on the highway. We drove for a couple of minutes and then turned onto a road with a primitive wooden sign that read “Cinder Cone Road.” We traveled through some Ponderosa pine, then some juniper, and then through another meadow. After the meadow, the scenery began to change. The road became rockier, and the plants became shrubbier and less colorful. We had entered an old lava bed. There were rocky outcroppings and flatter areas, all covered in plant life. I couldn’t believe how many plants were able to survive in such a demanding environment. We visited a large opening in the ground with smaller lava tube caves heading deeper underground, then hiked up a rocky hill to look at some flowers on a rare plants list. We drove along cliffs of crumbling rock and then entered a pine forest once again, before hitting the highway and heading back toward the office.

On the drive back, Mike explained why this was such an interesting place to work. The BLM Field Office in Alturas manages a wide variety of ecosystems from barren flat lands to sage-steppe habitat to pine-fir forests. We are located at the edge of the Great Basin to the East, and are bordered by the southern edge of the Cascade Range to the West. This means that plants from both ecosystems may be found growing right next to each other. Each day spent in the field showed me another type of terrain and plant life. It is comforting to know that I will not get bored of the surroundings of my new home, because if I am ready for a change, an entirely different ecosystem is never more than 20 miles away. I look forward to more exploration and I know that each day in the field will bring new discoveries and unique experiences.