In my last blog post, I wrote about the discovery of blowout penstemon in Wyoming. Briefly, blowout penstemon is a Wyoming and Nebraska endemic that grows only on blowout sand dunes; it’s federally listed under the Endangered Species Act. A big part of my internship is helping to find and document more populations or lack thereof.

Since I wrote last, I had the chance to do some field work documenting the number of individuals in the Wyoming type locality population and searching nearby sand dunes for more. I was in the field with several people who are very knowledgeable about the history and status of conservation of blowout penstemon. I learned that the populations in Nebraska face different threats than the populations  in Wyoming.  Land management in Nebraska has promoted “healing” of the blowouts by promoting vegetation growth in the sane and in some cases reshaping the dunes.  The blowout sand dune habitat is inherently unstable; it is subject to high winds that can erode some vegetated areas and bury others. Healing the dunes makes them more stable and deceases the chance that the dunes will shift and cover a road or otherwise interfere with development. This practice, however, significantly decreases suitable blowout penstemon habitat. This penstemon needs sparsely vegetated, relatively recently disturbed habitat to survive. Harsh weather and shifting substrates are barriers the plant has evolved to deal with, but competition is not. Habitat decline due to blowout healing is a major threat in Nebraska, but in Wyoming there have been no attempts to heal dunes. Because the populations face different threats, the effective management is different for each state.

I had a great time censusing one of the known populations with my mentor from the Wyoming Natural Diversity Database, the Wildlife and Botanist person from the BLM, a Biologist from the US Fish and Wildlife Service, and another CLM intern. We also looked for new populations but have found any more – yet. Here are a few pictures from the dunes: 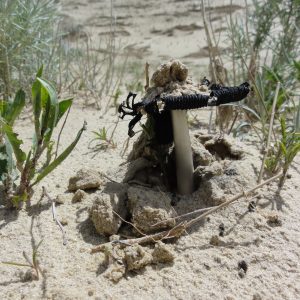 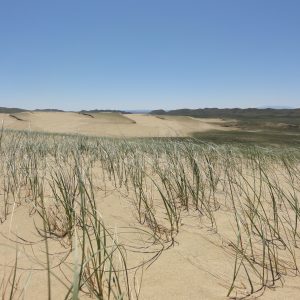 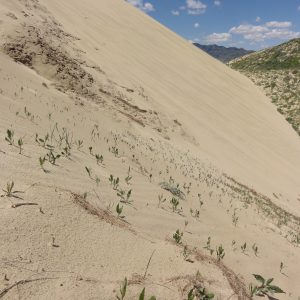