Over the season, my main project has been to map Mountain Plover habitat. However, this project has been interrupted from time to time by other projects from other areas of the BLM. It’s refreshing to receive a new project after bouncing around the countryside in the work truck for hours and I was happy to help out with Multiple Indicator Monitoring (MIM) on riparian habitats within the Kemmerer, WY, field office.
MIM helps assess the health of riparian areas before and after cattle grazing within specific areas along streams. MIM helps the BLM determine if grazing rotation should be altered or suspended temporarily along riparian areas. For two weeks, I sat in ankle- to waist-deep streams studying the vegetation composition along the banks of streams within one allotment. From sunrise to nearly sunset everyday, we wallowed in the water and soaked up the sun. What made the days most exciting was finding critters of all sorts up and down the streams. These critters included garter snakes, giant 5-inch long caterpillars, fish, and northern leopard frogs. I had seen leopard frogs before in science dissection labs, but never in the wild. So, it was nice to see one still hopping around without the stench of formaldehyde trailing behind it. Interestingly, although these frogs are commonly used for dissections, they are becoming of concern in our area. So, we eagerly took GPS locations of the frogs we sighted and, of course, tried to catch them. Northern leopard frogs are large, slimy, and can leap without warning, making them very difficult to catch. I was unsuccessful, though I attempted several times to catch a frog larger than my palm.
On weekends, I try to explore more of the area outside of the field office I work in. Lately, I’ve been enjoying Flaming Gorge National Recreation Area. The southern end of the gorge that crosses into Utah mingles with Ashley National Forest and offers some excellent hiking trails. My dog, Finn, and I love to spend our days exploring different areas of this part of the gorge. On one hike, we spooked a young bighorn sheep and watched it prance down the steep walls of the gorge. We have also seen several northern sage brush lizards and raptors. The water at the bottom of the gorge is a deep blue, contrasted beautifully against the red and white rock cliffs. There is much to explore around my field office, which has made for some fun weekend trips. The landscape varies drastically in every direction, making deciding where to go difficult. But no matter where I go, I find awe-inspiring landscapes as well as challenging and fulfilling adventures.

While the radio sits stubbornly on one clear classic rock station, we bounce along the high desert countryside on two-tracks rarely traversed by any other vehicle. Our mission has varied over the past month, from exploring raptor nests, mapping plover habitat, and searching for springs, seeps, and reservoirs.

We spent two days exploring raptor nests on ridges in an area called the Hogsback. Raptors like Ferruginous Hawks and Golden Eagles like to make their nests on cliff sides and ridge tops. A few Golden Eagle nests we found were greater than five feet tall, situated on high ridges. The nests are no longer inhabited this late in the summer, as full-grown fledglings clumsily flit from ridge to ridge. However, when we climbed up the ridges to peer into the nest cups we found various things such as antlers, feathers, and small mammal skeletons. We also nearly stumbled across Northern Sagebrush Lizards as they scampered across the rocky hillsides, blue bellies so distinct against a background of gray and brown. One large raptor nest had recently been taken over by kestrels, who were flitting in and out, scolding us as we climbed up the hill.

So far this summer, we have collected roughly 70,000 acres of Mountain Plover habitat–nearing our goal of 100,000. The Mountain Plover remains relatively elusive, however. At first glance, we often confuse Mountain Plovers with Horned Larks, which are similar in size with similar markings. Some days we come back with a mere 500 acres of habitat after searching for six hours, and other days we can search for three hours and come back with 13,000 acres. The pickings are becoming slim as we continue to search for habitat and we have begun looking in areas we never thought would have before for plover habitat, giving us glimpses into neat country we had not yet explored.

Springs and seeps are of particular interest to the BLM. There is little water in the high desert region of Wyoming, making any stretch of water very valuable, and the unique riparian vegetation that inhabits these areas even more valuable. Desert animals depend on these water sources and when they are not managed for correctly, cattle can destroy them. The BLM takes these areas into special consideration when monitoring active grazing areas. Many of these springs do not hold water all summer long, but can be identified by the vegetation that surrounds them: willows, beak sedge, and Nebraska sedge. Other springs are subterranean, only coasting above ground briefly before disappearing beneath the surface. Some other springs are considered developed, meaning their water is being directed to reservoirs or troughs for livestock.

Reservoirs in the high desert of southwest WY are important for a few reasons: they slow water flowing into the larger Bear River, hold sediment back from being dumped into the Bear River, provide habitat for waterfowl and other creatures, and are a more consistent water source for livestock and other animals. Reservoirs are simply man-made lakes with taller berms to prevent water and sediment from washing out quickly and back into streams. During our exploration of reservoirs we have seen Northern Harriers and several species of ducks with their growing ducklings. We have also found snake sheds and Sage Grouse sign, including cecal tar. Cecal tar is a black substance that Sage Grouse puke up in the morning–remnants of the tannin-rich sage they could not digest. However, not all of the reservoirs that we have found still hold water this late in the summer. Unfortunately, some reservoirs have naturally–or from cow trample–blown out, allowing water from streams to rush through, carrying heavy loads of sediment. It is difficult for the BLM to repair these reservoirs because they are many and money is short.

We hope to have our plover habitat complete by the next posting! So long for now.

The high desert district of southwest Wyoming may seem like a barren land, but in reality it is host to a whole cast of interesting critters. While mapping Mountain Plover habitat, our paths were constantly crossed by quick-footed prairie dogs (or p-dogs) and ground squirrels. P-dogs not so anxious to get across the road ahead of us sat on their burrows, Buddha-bellies inflated in front of them. More excitingly, we were lucky enough to spot three Burrowing Owls in, which had taken over two former p-dog abodes. Burrowing Owls take advantage of the many burrows created by p-dogs. Burrowing Owls are shy when approached by humans on foot, but surprisingly remain sentinel by their burrows when approached by trucks, which allowed us some pretty good views and photos. We had an opportunity to learn about other neat owls in Wyoming when we did an owl survey late one clear night during a full moon. We spent that time with members of the Forest Service working in Bridger National Forest. Three sensitive owls live in southwest Wyoming, including the Boreal Owl and the Great Grey Owl. We stood under the stars and broadcasted the calls of these owls from what looked like a small stereo with two speakers in hopes that any nearby owls would return with their own calls. Being late in the season for owl surveys, we were fortunate to hear a Great Horned Owl.

We’ve spent much of our time continuing Mountain Plover habitat mapping–for which we have covered approximately 25,000 acres. We have also participated in Multiple Indicator Monitoring (MIM) to assess stream quality and Proper Functioning Condition (PFC) assessments for streams. During all this time we’ve spotted multiple species of raptors, including the Ferruginous Hawk (a.k.a. ferroog), Red-tailed Hawk, Golden Eagle, Bald Eagle, Kestrel, and Northern Harrier. The nest below is a nest made by a ferroog. They typically build their nests on cliffs or rock ledges. We saw some recent Golden Eagle fledglings, who were taking frequent rests on ridges.

Another disheartening, but enlightening wildlife find would be the multiple dead fawn we have found throughout our travels. Wyoming experienced a particularly harsh winter, and it took its tole on the mule deer population. It has indicated that only 16% of the newborn fawn survived through the winter and spring months. Luckily the mule deer that have survived look hardy and healthy.

The highlight of the last couple weeks would have to be the spotting of the rare light morph Greater Sage Grouse hen and her six poults of normal gray coloration. No one in our field office had seen a sage grouse of such coloration and our photo below was added to the office wall of fame. 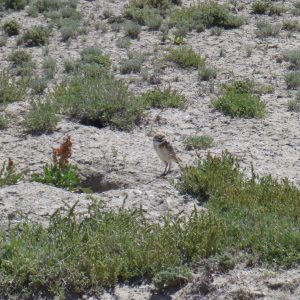 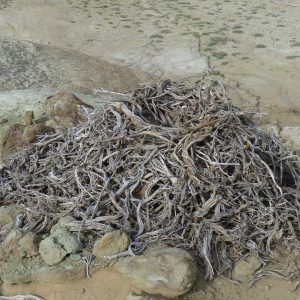 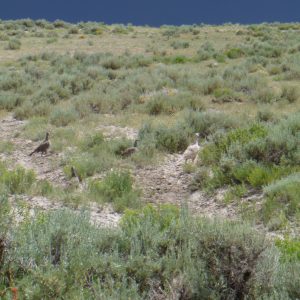 I have only been inhabiting the small community of Kemmerer, WY, for a short two weeks thus far. However, I have learned much in this time. One of the first things I’ve learned is how to fit in with the locals. People knew I was from out of town when I said “Kemmer-er-er-er,” stuttering like I was driving over speed bumps. “No, it’s KEMMer,” a local was kind enough to correct my Midwestern translation.

In fact, I’ve learned many new short-cuts in the English language. The Bureau of Land Management (BLM) loves to use acronyms to describe most anything that would take more than two syllables to state. I’ve been lost in conversations that are spoken nearly completely in letters rather than words. Like learning any new language, I’ve asked many questions and gradually retained the information I’ve received. Everyone has been very pleasant, understanding that I don’t naturally speak in code.

My mission thus far has been to map Mountain Plover (Charadrius montanus) habitat using Trimble units. Another intern and I bounce down gravel roads, stopping occasionally to explore prairie dog towns, raptor nests, and potential plover habitat. The plover remains elusive to me, though we have seen many Horned Larks (Eremophila alpestris) which we have often excitedly mistaken for plovers upon first sighting. We have also seen a badger, ground squirrels, mule deer, prairie dogs, various raptors, and antelope/pronghorn–which my fellow intern and I have come to call prontelopes. At the end of the day, we download our GPS information onto a computer and use it to create polygon features using ArcMap to highlight potential plover habitat areas on a map. Our data will hopefully aid in the responsible planning of future projects such as well pads.

It takes some time to get used to the vast landscape that is the High Desert District of Wyoming. Coming from northern Wisconsin, rich with trees and other vegetation, I’m still trying to get my bearings. I am generally accustomed–and comfortable with–only seeing a couple miles ahead of me before my line of sight is cut off by a copse of trees. When I asked a BLM employee the distance to the Uinta mountains range sitting on the horizon in the distance, he replied, “50-60 miles.” It’s going to take some time before I’m able to judge distance and distinguish between one rolling sage brush hill and another, but I have plenty of people to help me and I am eager to learn.

I’ve learned a lot about the BLM already in these two short weeks and have met many interesting and knowledgeable individuals who have made long car rides and days in the field all the more exciting. I’m anticipating that I will gain many valuable experiences working with such a large, integrated government organization.