It is my last day here in Klamath Falls, OR, after an awesome internship with USFWS.  I can now PIT-tag fish, electrofish streams, net shock fish like a pro (well, more like an amateur that doesn’t suck quite as much as when she started), stream survey like nobody’s business, and have learned some pretty nifty excel and GIS tricks along the way while wading through our season’s data.  Probably the most fun I’ve had is getting know, camping with, and generally having an awesome time with my fellow interns.  Thanks guys, for a most excellent field season.

Night surveys are rough.  That being said, myself and my fellow interns had a blast doing just that down in Modoc County, California.  Our goal was to gather data regarding Modoc suckers.  If their populations look to be in good shape USFWS will begin the process of downlisting their status.

The general protocol was to walk streams at night with high powered flashlights and count said fish (they are fairly immobile at night, making them easier to count).  This also involved camping in the beautiful Modoc National Forest.  In fact, one of the greatest perks of this job (as I’m sure it is with many interns) is the locations we get to visit, both on the job and off.  We are surrounded by so many amazing adventuring opportunities. From snow-shoeing at Crater Lake to watching the eclipse at Lava Beds National Monument to mushroom hunting in the Cascades (we found morels!) it has been wonderful exploring Klamath Falls’ surroundings.  We look forward to new frontiers as we head to Gearhart Mountain Wilderness Area for several weeks of Bull trout surveys after the CLM training in Chicago.

After 6 weeks of adult sucker work for USGS we have made the move back to FWS.  Getting to work for two different government agencies within the same internship has been an awesome learning experience in and of itself.  In this area USGS serves almost as an private contractor that helps to fulfill the research needs of FWS and BLM in this area.  BLM and FWS both have a special interest in many of the local large management decisions (in a simplified way, water for farmers and endangered fish respectively), so USGS helps to provide unbiased data.

We’ve said goodbye for now to adult suckers and are moving on to some lost river and short nose juvenile work, plus prep for other upcoming projects.  Currently we are working on a man-made pond created in the Lower Klamath Wildlife Refuge where suckers have been stocked to gain a better understanding of their response to an artificial environment.  We set fyke nets over night and then collect length data and PIT tag numbers to measure their growth since being moved to the pond.  Hopefully the data we collect will begin to shed some light on whether an artificial stocking program is a viable option for these endangered suckers.

I’m currently about a month into an internship with USFWS in Klamath Falls, OR, and having an absolutely amazing time.  Our first month has been spent with the USGS working with a couple species of suckers (see the blogpost ‘A Fish Called Sucker’ to get the low-down from another intern here in Klamath Falls and some good pictures of the beautiful creature itself).  We are collecting data for a mark-recapture study by inserting pit tags into captured fish and monitoring their movements with pit tag arrays.  Fish collection occurs at night on the lake with trammel nets, during the day at a weir set up across a river that flows into the lake, and trammel nets set by hand at some springs on the edge of the lake where many suckers spawn.  Data must be downloaded from the remote sites by hand, which has lead to some interesting travel around the Klamath Basin.  We’ve had a chance to learn how pit-tag fish, ID suckers, operate the neat field ranger computers, and the basics of driving the motor boat.  The fish begin to move upriver as soon temperatures rise; Thursday there were no fish, while Friday was gorgeously sunny with about 240 fish caught.  The fish are mostly between 55-70 cm long – it’s amazing to see a seething pool of that many big fish in the trap!  Apparently that’s on the low end as well…we’re looking forward to higher numbers next week! 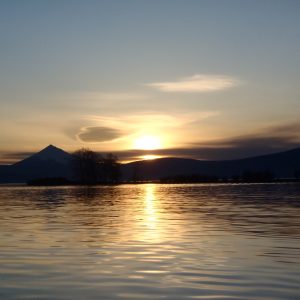 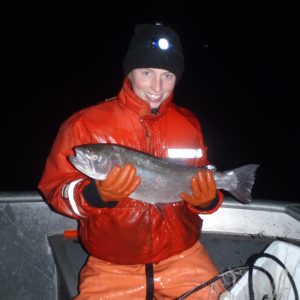 A good size trout from our evening’s fishing 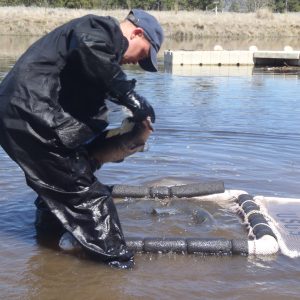 Working up fish at the weir 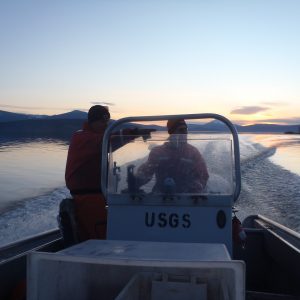