I feel as though this field season is best sumerized in a Haiku.

The damp fish shivers
Vibrating river beats…
A LEAP into the light. 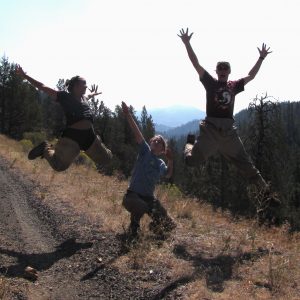 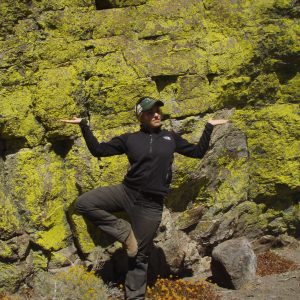 The modoc sucker is a smaller member of the sucker family. It lives in montane streams in a veriety of habitat–from silty meadering marshes to steep canyon streams. These are two habitats that are very interesting to navigate at 2:00 in the morning–when we were doing our surveys. Jane Fonda’s workouts have nothing on walking up a  pine-needle-covered canyon wall in felt bottom boots and waders. If anybody out there is looking for a weight loss plan I’ve found it!

The good news, other than a great cardio session, is that we saw lots of suckers!  From now on I am going to do my fishing at midnight. You could almost pick up the fish, they were so still. We also saw many large tasty looking trout. To all the fishermen out there–do your stream recon at night and you will be sure to find some great fishing holes. As far as suckers go, this is kind of a Cinderella story. This is a species that may potentially be downlisted, so it is great to see their populations stabilize, occupying in many cases full reach of their available habitat…however inaccessible that habitat may be. 🙂

Goldilocks and the Three Bears serves as a great analogy for life after college. We are presented with many choices of varying levels of palatability and comfort. We try different proverbial porridges until something feels just right. It has been almost four years since I graduated college and I have tasted many porridges.

Many have not been very tasty.  However,  I have been working at the Klamath Falls USFWS office for just over a month now, and I have never been happier in a job.

In my first week I strapped on my gaiters, snagged my binoculars and spent the early mornings trekking through snow fields to spy on nesting pairs of bald eagles. Prior to moving to the Klamath Basin, I could count the number of eagles I had seen on two hands, and that is after two seasons of raptor surveys. Now I would need many hands and feet to count the number of eagles I see in a week! Eagles are not the only species I will be working with this summer. Part of the joy of this position is that we have the opportunity to work with many different threatened and endangered species. Already I have done surveys for endangered lilies, and spent many muddy hours searching for Oregon Spotted Frogs.  Just next week,  my fellow interns and I will be spending a week in Modoc National Forest doing night surveys for Modoc Suckers.  They are a smaller benthic freshwater fish that can only be found in three limited watersheds in California and Oregon.

Yet another wonderful feature of this position is the leadership role we are allowed to take. Each intern is appointed as a project lead for various projects throughout the summer. Essentially it is our responsibility help conceive, plan and execute a monitoring project for a specific species. This includes coordinating with other agencies, establishing and refining a survey protocol, and leading the team while out in the field. We have the invaluable opportunity to work along side the permanent senior biologists in this effort. I am learning a lot, and it feels good to finally dust off some off the knowledge I acquired in college.

Taking this internship has reaffirmed my goals of becoming a field biologist. I have reached baby bear status, where finally I’m in a position that feels just right.