I spent the last month or so of my internship making GIS models and giving Kim, our wonderful receptionist, a hard time about there not being enough Christmas candy around the office. While this may not SEEM like a bang, it certainly was (you don’t know Kim…kidding…). Field season in Wyoming ended (mostly), and I continued to learn a tremendous amount inside!

My GIS models were regarding an area of land called “Fortification Creek” that is home to a well-loved and utilized (by some, anyway) herd of elk. The habitat is surrounded by non-habitat, and so, generally speaking, when habitat is destroyed by drilling, the elk don’t really go somewhere else, they just have less area in which to live. As a result, several individuals and organized groups of people are up in arms about the continued drilling in Fort Creek, but the developers have a lawful right to capitalize on their leases, which were sold years ago (see? Enter the “bang”). The BLM is supposed to manage all this.

My job was to create a GIS model that would standardize analysis of how much and which parcels of habitat would be lost with each drilling activity. Then, I executed the model for various areas of Fortification Creek and made maps in preparation for a meeting with management about well permitting. I also suggested a new metric for evaluating the quality of the remaining habitat.

In the process, I learned how to make models, about state director reviews of field office decisions, and about many more of the wildlife issues associated with oil and gas drilling in the Powder River basin. I wish I had been able to stay in Buffalo longer and develop that project more fully. It was exactly the sort of worthwhile activity I wanted to be doing, and my days flew by.

It really is a different world out there. How many APDs in the POD got SDRed? Who was the NRS? Yeah, thought so. The difference that I can see in myself, in terms of specific learned topics, general understanding of BLM/government workings, and philosophical maturity regarding energy development and wildlife, is huge. Situations are NEVER as simple as they seem, and there is almost always another (often quite reasonable) side of the story.

Working in the Buffalo Field Office was a pleasure. I have never worked in quite so friendly an environment, and I certainly plan to keep in touch with many of the people I met there. And, of course, it was hard to watch the Big Horns in the rearview… but I know I’ll be back. Thanks to all who made all this possible, and all who will come after and add to the ranks of people who really care.

Almost 4 months in. We recently spent a week working with a USGS hydrology team surveying the Tongue River (the river with our very favorite riparian zone! Acclaimed and adored location of the Mighty Welch Riparian Area Monitoring Program [MWRAMP]!). It was interesting to branch out a bit, both into new techniques and into another government agency. As the government’s main data-collecting agency, USGS is more science- and procedure-oriented and less management-focused than the BLM, and it was helpful to get another perspective as I’m beginning to think about what I might want to do next.

The BLM, USGS, and several other federal, state, and tribal agencies are working together in an aquatic task group that addresses the effects of the water produced by coalbed methane extraction on aquatic ecosystems. To that end, we were sampling for macroinvertebrates, collecting water quality data, and surveying some of the river’s physical characteristics.

After the USGS week, we headed up to the southern Bighorns for a week of sage grouse tracking with radio telemetry. The yellow autumn aspens were stunning, we learned a new skill, and we saw lots of grouse! It’s difficult to imagine a much better way to spend time; after long days of walking around in the mountains, we drove back down the rough road to a little game warden’s cabin overlooking a fork of the Powder River.

As usual, most other days have also been fairly dynamic:
A rancher wanted help loading hundreds of sheep into a huge semi truck. Meet in the corral at 7 and learn fast. “Wear your walking shoes.” (Translation: you will be stepped on by many bleating fluffballs).
Wolf spiders have eight eyes and look like old men. This is not something that I realized before, but check them out with a hand lens, they are AWESOME.
Which is a better method for grouse pellet counts, circle quadrats or transects? If circles, how large? I think that this is the only time Anya and I have ever had what our supervisor approvingly calls a “spirited discussion.”
On rare occasions and with a cursory look, a cow looks alarmingly like a black bear…

… Still very much enjoying my time in Buffalo and looking forward to what’s coming next. 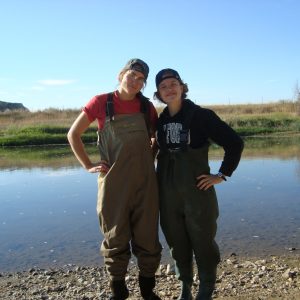 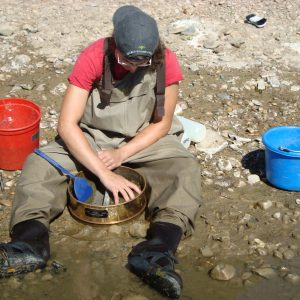 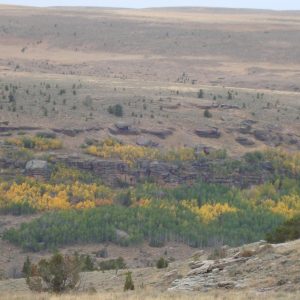 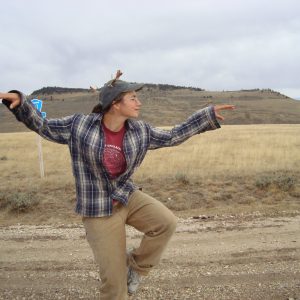 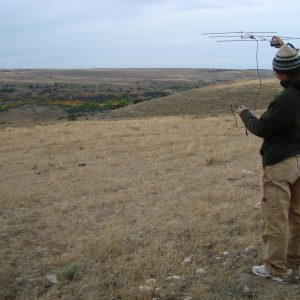 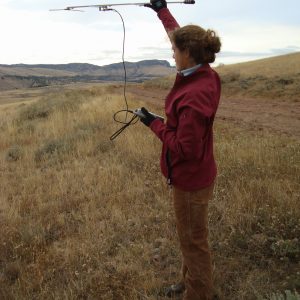 It’s pretty hard to believe that I’ve been in Buffalo for 11 weeks. In some respects, it seems as though it’s flying by. I still have lots to learn, there are some exciting wildlife projects on the horizon, and days almost never drag. In other respects, though, it feels like I’ve been here forever. I was out in Montana a few weekends ago, and a friendly cashier asked me where I was from. “Buffalo, Wyoming,” I said, with only a little hesitation. And that was that. Certainly weird, but exciting, too – this place is becoming my home.

My time as a range intern is wrapping up as the range plants are curing into a prickly and impossible-to-identify caramel/taupe/tan/gold mass. It looks more like a sea of fun-shaped pasta than the lush fields of June and July, so we’re beginning to focus more specifically on wildlife projects, such as prioritizing areas for fence marking, standardizing a sage-grouse pellet count methodology, and using the Anabat to identify local resident bat populations.

Our main transitional project was the development of a riparian monitoring procedure for a section of the Tongue River (read Anya’s post too: “Land Management and the Act of Monitoring”). It will be a useful tool for the range specialists because the area is leased to ranchers for cow grazing, and it’s important to the wildlife biologists because the land immediately bordering the Tongue is a thruway for migratory birds. I hope (and think) that we’ve been comprehensive enough that we’re leaving a Welch monitoring legacy for generations of CBG interns to come… Here’s what it looks like:

Taking pictures of cover boards is a useful way to monitor changes in vertical structure. Please note the board's most impressive feature: a built-in, data-holding arm.

Vegetation along permanent transects is monitored with a Daubenmire frame

A spider we found on one of the transects.

I’ve always lived in the East, so deciduous forests, Eastern grey squirrels (Sciurus carolinensis), Northern cardinals (Cardinalis cardinalis), and the rolling Appalachians are intimately familiar and feel definitively like home. When I first arrived here in Buffalo, Wyoming, I had never seen sagebrush (Artemisia spp.). The pronghorns (Antilocapra americana) looked like they belonged on a photo safari, and there were cacti (Opuntia spp.) growing out of the actual ground instead of in pots (?!). The word “range” was only a synonym for geographical distribution or of the “Ohhhhhh, home on the” variety, and I quickly discovered that snow-capped peaks DO exist beyond pictures.

I’m currently in the middle of my second week here at the Buffalo BLM, and though I’m still often struck by my comparatively unfamiliar surroundings, I don’t feel so out of context anymore. Thanks to my thorough and friendly training, I recognize the vast majority of the flora and fauna I see out on the range, and I’m starting to feel more at home here. Beyond the “Look! It’s a… thing” stage. Whew. It’s been quite an adventure, and I’ve gotten to see a lot of the northeastern Wyoming countryside, which is stunning (pictures later…). Definitely a good introduction.

Now that I’ve settled in a bit and taken a few leaps forward re. natural history (with, of course, a few leaps left to go), I’m really looking forward to expanding my horizons. My job description is quite varied – from rangeland monitoring to sage-grouse projects – and my supervisor is helping us to experience as much as we can. Today, we’re going to specific range sites to do photo monitoring. Tomorrow, we’re leaving the office at 4 a.m. (optional, but worth it!) to tag along on a riparian bird survey. This active office also houses hydrology, fire, and natural resource specialists, as well as petroleum engineering technicians. There is SO much to learn here; I’m really going to have to make these next five months count.