I am in the final days of my internship as well as my time in the Arizona desert. Things have really begun to change around here, and it makes me a little sad to be leaving. The desert autumn brings the most wonderful weather shift–finally seeing frost on the sagebrush in the early dawn light, seeing my breath, wearing a sweater for most of the day, and actually wanting to be outside after 3pm–these things are all new to me here. The summer heat was so miserable I thought it would never end. Even in late September and early October it continued to break 100 degrees on a regular basis. Then suddenly something happened; we had an early autumn storm–something not very common around here–which brought rain for several days, the most spectacular lightning I’ve ever seen, and very muddy roads. Then it was cool. And that it has stayed. I can now say that it is absolutely perfect hiking weather, but I’m leaving!

The desert isn’t for everybody. I certainly don’t think it’s for me. I’m used to dark green vegetation surrounding me, and humid air, and streams, and sweaters in July. But it has left a certain something in me, something new, maybe an appreciation for the unknown. Never have I seen such vast expanses of territory unoccupied by humans, or really anything else for that matter. Being alone in the desert is like being in space. It’s quiet and still, like a vacuum. But then suddenly you develop an eye for movement… And then you see ground squirrels flashing their white tails at you, and giant grasshoppers, and tiny sparrows flitting between bushes, or the distant Zeeee of a towhee or the laugh of a pinyon jay. During my work surveying Mexican spotted owl potential habitat, I’ve probably stood in places no other human has been. I can appreciate that.

In the last few weeks I’ve checked a few more off of my desert animals checklist, including a tarantula, an owl (probably a short-eared or long-eared), a desert tortoise, and even a baby bighorn sheep!!! I never did and likely never will catch a glimpse of the elusive Mexican spotted owl. But I would like to think that through my work here, I’ve indirectly helped him out somehow. Without having done this internship I never would have gotten to do so many things, and it’s been hard work, but such a unique experience! I’ve thoroughly expanded the skill set to put on my resume, including things like ArcGIS Training, navigation skills, mist netting and banding, construction monitoring, backcountry hiking, bat identification, spotted owl biology and habitat classification, writing reports, learning desert plants, and driving a beast of a truck. So it’s been worthwhile! I leave here with a sense of accomplishment and a wonder at where this will take me next. So, here’s to the UNKNOWN! Woooooooo!!!

I couldn’t help but make an Owl pun at a time like this! We have begun our Mexican Spotted Owl habitat surveys here at the field office in St. George, UT. This entails leaving the office at 6:00 or 7:00 in the morning in order to attempt to beat the heat, which doesn’t ever happen no matter how early we start. Maybe if we left the office at 3:00 AM it would stay below 100 during our nine hours in the field. Maybe. Needless to say, it’s HOT. But the weather is predictably beautiful, something that I really appreciate coming from the notoriously unpredictable Pacific Northwest.

What are we doing out there? We’re really looking for “cool microsites” — spots in canyon caves and crevices or ponderosa pine forests that would provide the owls with a spot to nest and forage where it stays shady throughout the day. I can relate to the owls in this desire for consistent shade, that’s for sure. Although we haven’t spied any owls yet (they’re not exactly common), I’m confident that by the end of my five months we will. Or at least hear a shy hoot. However, our trips have not been devoid of wildlife. We’ve come across a pair of Red-Tailed Hawks soaring along canyon walls, a lone Northern Harrier crying out in the distance, plentiful riparian songbirds catching bugs around a canyon spring, and some really cute Red-Spotted Toads.

It’s been tricky work, and I’ve had my share of complications, including heat exhaustion and a sprained ankle. But despite the difficulties, the remote locations we have had the chance to see have been pretty spectacular. These are spots that are not easily accessed on foot, let alone convenient for driving. They require a lot of washboarding and use of 4-wheel drive, then clambering up steep sandy hills to get a decent view. It’s quite the adventure! One thing in particular that I have noticed about Arizona is its tendency for spiky plants. Literally everything growing here has spines, spikes, prickles, burrs, or something else sharp that will get stuck to your socks and stick you when you’re least expecting it. It makes sense to me, though. A harsh environment calls for equally harsh methods of dealing. I’m always quietly panicking that I will trip and fall on a Joshua tree, though. I have a theory that those branches (leaves? What are they?) would impale me if I fell at just the right angle. Luckily, that’s a pretty ridiculous theory.

So, as the summer presses on, we will continue with our surveys right into the monsoon season (yep, there’s a monsoon season!!!) and beyond. I can’t wait to see what else Arizona has to offer! 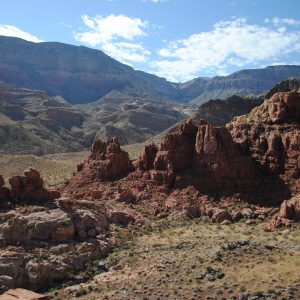 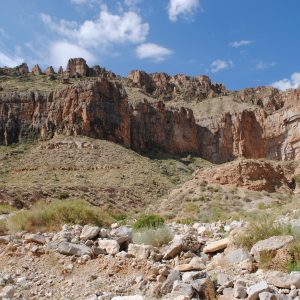 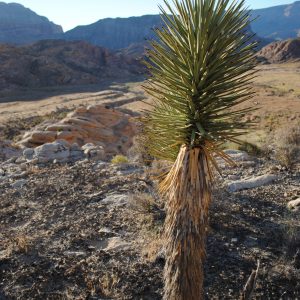 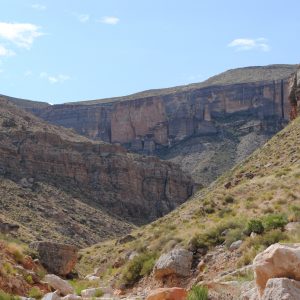 Well, I’ve officially finished my 4th week of work at the BLM Office in St. George, UT, and it’s been such a whirlwind since the day I began that I’ve had absolutely no BLOG TIME! Bummer. Also, with all the traveling, camping, and Grand Canyon time, I’ve had limited internet access. Such is the life of a field intern, I suppose.

So far I’ve had an extremely diverse range of experiences alongside my co-intern, Carley. Although we have only just began our main project for the summer — habitat surveys for the Mexican spotted owl (or MSO as we lovingly call it) — that has given us the time to learn other, equally important skills! Duh!

My first day on the job (in the field, that is), we worked out on the Virgin River doing fish surveys. Particularly, we were looking for native desert freshwater fish like the Virgin River chub, the flannelmouth sucker, and the extremely elusive woundfin minnow (which, sadly buy not surprisingly, we never saw). Mostly, however, we found netfull after netfull of red shiner, a highly invasive species clearly dominating the part of the River we sampled. They never got much bigger than a few inches long, but were a HUGE nuisance nonetheless.

This was my first real day out in the desert heat (hello, 105 °F), and I made the ignorant mistake of not bringing enough water for nine hours in the sun. Whatever you do, don’t do this. I’d say bring at least four liters for one long field day. Consequently, I went home with what I think must have been mild heat stroke — a migraine, the chills, and a nauseating feeling that just made me want to go straight to bed. So that’s what I did.

The two days that I participated in this work were long, difficult, and exciting. I learned all about working a fish seine and got to see some really unique locations along the Virgin in Nevada. In the Virgin River Gorge (a section of the River snuggled down between two towering cliff walls), we even saw bighorn sheep tracks!

The week after that, I was off to the Grand Canyon for the CLM workshop. Then last week (July 6 – July 10; yes, we worked on a Saturday!), we had the marvelous opportunity to live the way bat biologists live — nocturnally! And the bats were so CUTE! Seriously, though, I’ve always thought bats were sort of weird-looking in photographs. But in real life, they’re totally adorable. I mean, there was massive cooing occurring on my part. Although I didn’t get tho handle the bats ( 🙁 — no rabies shots), I got super up-close looks at them, and I even got to feel a mama bat’s pregnant belly while her biting teeth were held well out of harm’s way (“feel that marble? That’s the pup’s head!”). In addition, I held two birds that were accidentally caught in the pre-bat dusk period: a violet-green swallow and a yellow-bellied sapsucker. We also unintentionally caught a nighthawk — one of the coolest birds I’ve had the chance of seeing.

But, more importantly, while I participated we caught two rare female spotted bats. Super-cute and mild-mannered in hand, these bats have the tendency to capture the hearts of all onlookers. As cheesy as it sounds, it’s true. In the sky, however, they’re far from tender. They’re fierce hunters and make the loudest, most intense clicking sound as they pulse their echolocation in search of large moths. When we heard this unmistakable sound, all headlamps would be turned off and silence fell. We tried to look like strangely-shaped rocks so as not to frighten them away from our awaiting nets. They would fly so close our heads I could actually feel their wingbeats, and sometimes large, squirmy moths would fall right into my lap in an attempt to escape impending death. 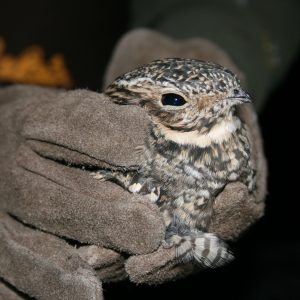 A common nighthawk that was tangled in a mist-net at dusk, before bat activity had begun. 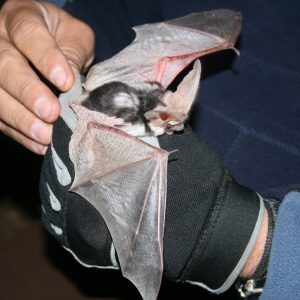 A spotted bat being delicately handled, awaiting her turn to be wing-punched for DNA analysis (don’t worry, it doesn’t hurt her and heals in about two to three weeks!)

The excitement of the Bat Blitz had to come to end. But for now, I await our next adventure!