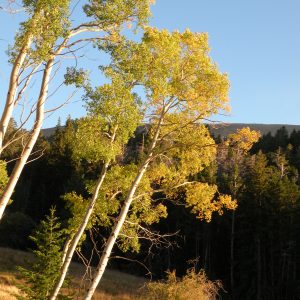 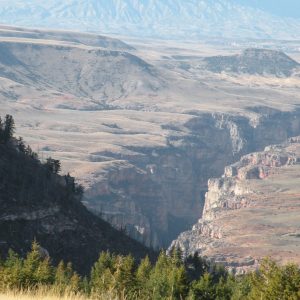 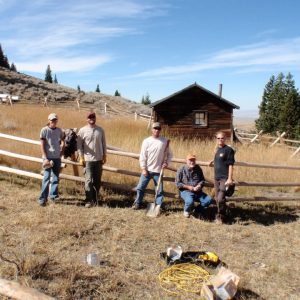 I am very excited that my internship has officially been extended for an extra 2 months! To “pay for” the extension, I have been working on seed collections of 6 species for the Seeds of Success (SOS) program. So far they include winterfat, showy milkweed, rabbitbrush, wild licorice, and shadscale saltbrush. The sixth species is to be a sagebrush, which the Cody Field Office will probably use for reseeding projects on prescribed burn areas.

Other work activities have included documenting aspen regeneration progress in a riparian project area, building buck and rail  fence around a historical structure to protect it from livestock, and painting wood stain on fences around open mine shafts to prevent rotting. It’s always nice to have a break in routine to try something different, and hopefully I will be able to assist more people around the office to get a taste of what they do.

Other than that, it’s the marvelous business of field work as usual and this intern is quite happy to keep on keeping on.

As everyone else is wrapping up their internships, mine is just beginning.  I’m working with the Bureau of Land Management in Portland, happy to be employed, and excited about the potential for new experiences.  First on the list: WINTER!  I’m a Floridian so I’m used to the wet.  The cold AND wet is a challenge that I welcome with open arms (and waterproof gloves, a jacket, and rain pants).

Douglas firs and other conifers - Near Elk Lake, Oregon

Yesterday was my first day in the wilds of Oregon.  We were checking up on some contractors who have been sampling for the fungus Bridgeoporus nobilissimus within Willamette National Forest.  Tagging along behind a BLM botanist, I was finally able to get someone to answer my unrelenting stream of questions (thanks, Kelli!) and was properly introduced to the numerous conifers of the Pacific northwest.  The forests were rather drippy as expected, but with the moisture comes thick blankets of mosses and lichens.

One site we visited was located next to a small lake and partially overlapped a rock talus.  The talus has prevented conifers from taking over the area and has allowed deciduous species to proliferate instead.  We were there just in time to see the vine maples (Acer circinatum) with their fall foliage in full effect.

The talus also provided a home for so many newts (Taricha granulosa)! I’m told that they’re extremely common -too common to warrant a photograph- but I’ve yet to find evidence of that.  As an amateur photographer, I’ve always hated birds for two reasons.  First, they’re usually perched high in the trees behind leaves/branches/obstruction of some sort, and second, they always fly away before I’m able to focus on them.  Newts are the exact opposite… easily accessed, slow moving, and their bright orange bellies are ridiculously adorable to boot!

It’s unlikely that I’ll be offered very many opportunities to go out in the field during my time in this internship but I’m enjoying the everyday life here in Portland as well. I find it kind of hilarious that I have a job in which I commute to downtown everyday to work in an office building from 8-5:00 five days a week. It’s so normal and stress-free compared to my former schedule as a graduate student. The people that I am working with have been wonderful so far and incredibly welcoming and I look forward to the coming months. We’ll see how I feel about winter come December/January!

Less than a month left of my internship here in New Mexico and oh the adventures I have had. Currently I am getting ready for a weekend trip to the Grand Canyon and I could not be more excited! I cannot wait to watch the sunrise and sunset over the canyon, and to roast marshmallows on the fire.

I have made a few more collections since last time. Now I am mostly waiting for the cool season grasses to go to seed, including Sporobolus cryptandrus, Bouteloua gracilis, and Sporobolus giganteus.

Other than seed collections, I have been involved in some volunteer days here at the Bureau of Land Management. One involved working in the community by painting fences, landscaping, and organizing records. Another day I went out and picked up trash at a local recreation area with over 100 community volunteers.

Wish I could keep typing, but I have to finish packing for the Grand Canyon!