I cannot believe it is already my last week of this internship. Pack up and come along for the ride through all the Great Basin explorations of our summer!

The rest of the season can be broken up into 3 main stages:

Unlike LODI earlier this season, when scouting for globemallow we aren’t looking for just one species but rather any in the genus. This has made it interesting to see all the different species of globemallow. Trips to find this plant lead us much farther into the Great Basin and into very different habitats than LODI. We found that Globemallow liked to grow in quite disturbed places, often along roadsides or in old roadbeds. It also seemed to do better in the very hot, dry, and low elevation areas of the Great Basin with sandier soils. When on hills we noticed a pattern of Globemallow only growing in a narrow mid elevation band around the hillsides. In addition to the usual scouting process I outlined in my previous blog about LODI, for Globemallow, we have begun taking an herbarium specimen from each population. This means we dig up a plant or a few plants, while keeping most roots intact and attached and press it to be used for records and identification later. The goal is to have a pressed plant that takes up about two thirds of the page and is a clean presentation of the plant. To make a good herbarium we sometimes need to pluck off leaves and flowers to make it appear less cluttered. In order for the plant to press well we may also need to shave down the root so it can lay flat. In addition to the physical plant we add information about the habitat, soil type, surrounding species and exact coordinates from where the plant was taken. 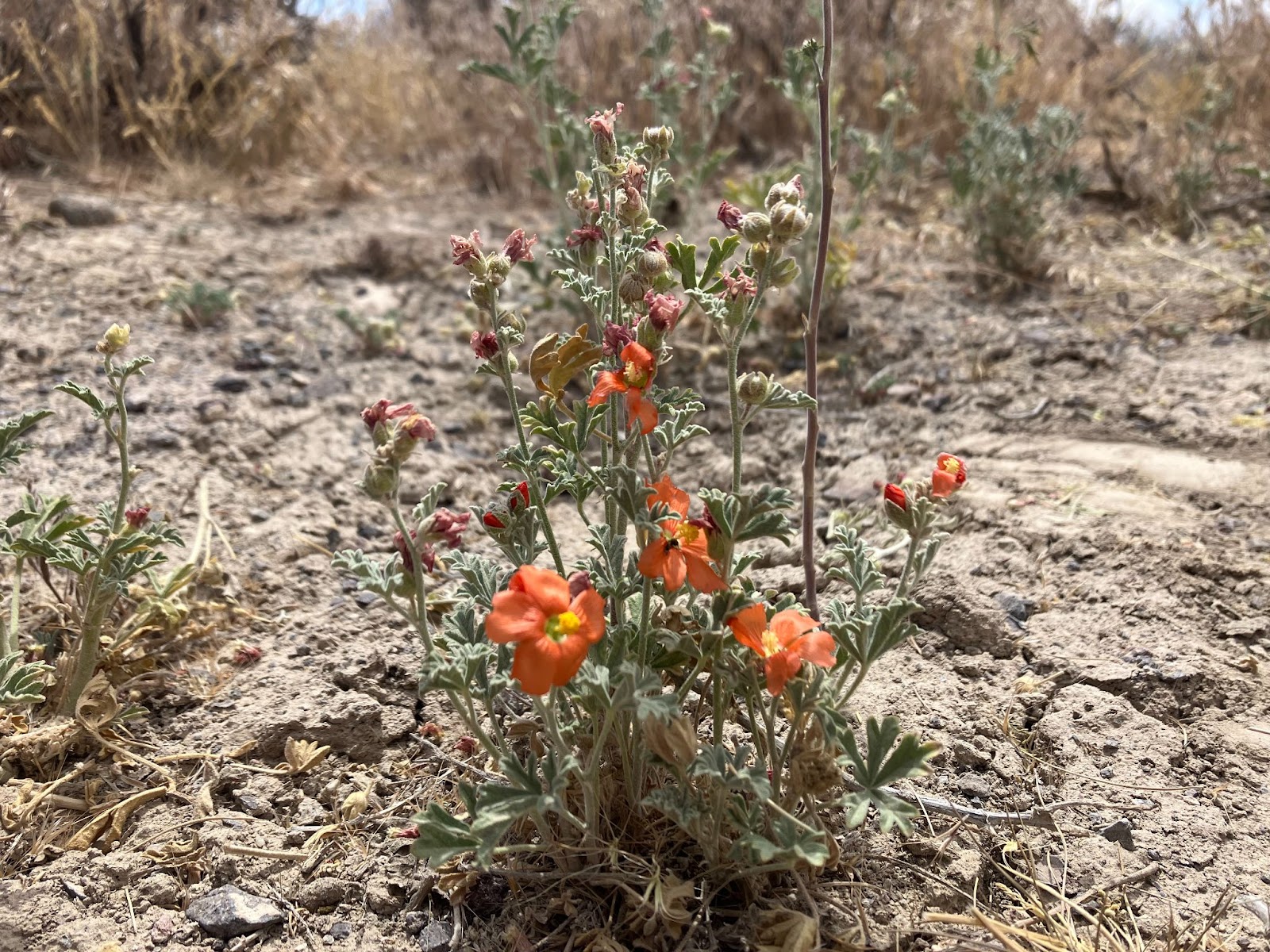 By early July some Globemallow populations were ready to collect. July become the month of the mad dash to get as much seed as possible before it all dispersed.

When collecting, the goal is to get at least 2000 seeds from each population. This is why it is so important to find at least 200 plants when scouting a population. 2000 seed usually means collecting at least 400 seed heads depending on how much seed they each hold. Globemallow seeds are arranged in round seed heads that look like little “cheese wheels” when they begin to open, holding seeds in different slices. It’s important to keep in mind that we don’t want to deplete the population of all its seed. For this reason we only collect 25% of seeds in a population for that season. When estimating this 25% we include already dispersed seed heads or immature seed heads in the total count of seed for that season.

By August most of the Globemallow seed has been dispersed and the plants are drying up. For the last few weeks of our internship we shifted to scouting for Eriogonum umbellatum (ERUM). the research station is in the early phases of incorporating ERUM. For this reason scouting looked a little different than LODI and Globemallow. For ERUm we did not need to find 200 plants. The minimum was just 10 plants in order to get all the leaf tissue needed. The goal for ERUM was also to get a larger amount of potential population locations to work with. Instead of getting just a few populations across a large region we wanted to scout regions much more thoroughly and get samples from the highest and lowest elevations in those areas. This type of scouting brought Sahalie and I a lot of fun variation in our last few weeks. Unlike working with globemallow in low disturbed places along roadsides, the ERUM populations we needed were often at high elevations. This meant that we sometimes got to have an epic hike up 10,000 ft mountains to get our samples.

Since the start of the scouting season in April, Sahalie and I have camped 2-3 nights nearly every week for the past 4 months. Our “office” truly looks different everyday. We have traveled to Wyoming, Utah, Nevada, Idaho, Oregon, and Washington. Sometimes we even hit 3 different states in just one trip! This has led us to some incredible adventures in the most remote corners of the desert and on top of mountain meadows all over of The Great Basin. Here are just a few of my favorite views and campsites.

Throughout this season I learned many botany and field skills that I am excited to apply in my future career. Some of the most valuable skills and experiences being:

While this is a goodbye to my CLM internship it is not my goodbye to Boise! Getting so lucky with a great crew and group of friends in the city, I just couldn’t bring myself to leave yet. Sahalie and I have moved out of the trailer and into a house in town with another one of our coworkers. I’m so excited for this new chapter in Boise where I can settle in and spend some time outside of my tent and the forest service truck for now. I’m planning on spending this fall gaining some farm experience on local farms around Boise. This farm experience combined with my CLM experience will give me valuable skills to apply towards my next step in my career. I plan on moving into soil health research and conservation planning within food production systems.

I am so grateful for this incredible summer with all the places I’ve seen, people I’ve met, and new skills I have learned!