I spent the previous five weeks walking the desert surveying for rare plants. As I’ve mentioned before, I was doing surveys for rare plants on areas where herbicide treatments intended to restore grassland in areas that have been converted to shrubland through grazing as part of the Restore New Mexico program. In my previous posts on the subject, I’ve mostly talked about Peniocereus greggii, partly because that is all I was finding and partly because that is all I expected to find. However, since then we’ve found the other, and much more exciting, of our target species: Pediomelum pentaphyllum, a.k.a. Chihuahuan scurfpea, a.k.a. (for those who like USDA codes) PEPE27!

That western Texas record is a story in itself. A specimen was collected during the United States and Mexican Boundary Survey in 1853, but the locality is very uncertain. The specimen’s label says it was collected “chiefly in the Valley of the Rio Grande, below Doñana”. A note anonymously handwritten in pencil says “Fields nr the Presidio del Norte, August, Presidio Co., Texas”. This presents multiple problems: Doña Ana (in southern New Mexico) and Presidio del Norte (now called Ojinaga) are 240 miles apart; Ojinaga is in Chihuahua, Mexico, not Texas (although of course “fields near” Ojinaga might be in Texas); we have no idea where that “Fields nr the Presidio del Norte” locality comes from or on what basis we should take it to be accurate. That last problem turns out to be relatively easily solved. The “Presidio del Norte” locality comes from the Report on the United States and Mexican Boundary Survey. We’re still left with the first two problems and no good way to resolve them. I’ve encountered this kind of confusion before; specimens from the boundary survey have one locality on the specimen label and a different locality in the report and you don’t know which one (if any) is correct. So far as I can tell, locality information on boundary survey specimens just isn’t particularly reliable. So, we don’t know if that specimen came from New Mexico, Texas, or Chihuahua and it is our only basis for believing Pediomelum pentaphyllum has ever been seen in Texas. Ugh. By the way, you can see this specimen for yourself: It’s amazing how easily things like this can be tracked down these days. The report is online, a photograph of the specimen is online, it’s all right there! I’m still left with an irritating uncertainty, but at least it didn’t take me weeks of waiting for letters back and forth and schlepping things from the library.

OK, back to Pediomelum pentaphyllum. It’s rare, and most of the surveys for it have come up empty-handed. I did a couple of weeks of surveying back in 2010, for instance, during which I did not see a single individual except for a few at the Hachita Valley population to familiarize myself with the species at a known population. More extensive surveys for the Restore New Mexico program in 2012 had the same result. For this year’s surveys, I basically expected that we’d get to wander around in the desert for a few weeks, see some wonderful places, put a couple hundred miles on our shoes, and not see any Pediomelum pentaphyllum. So it took a while for me to believe what I was seeing when I stumbled across the first one: 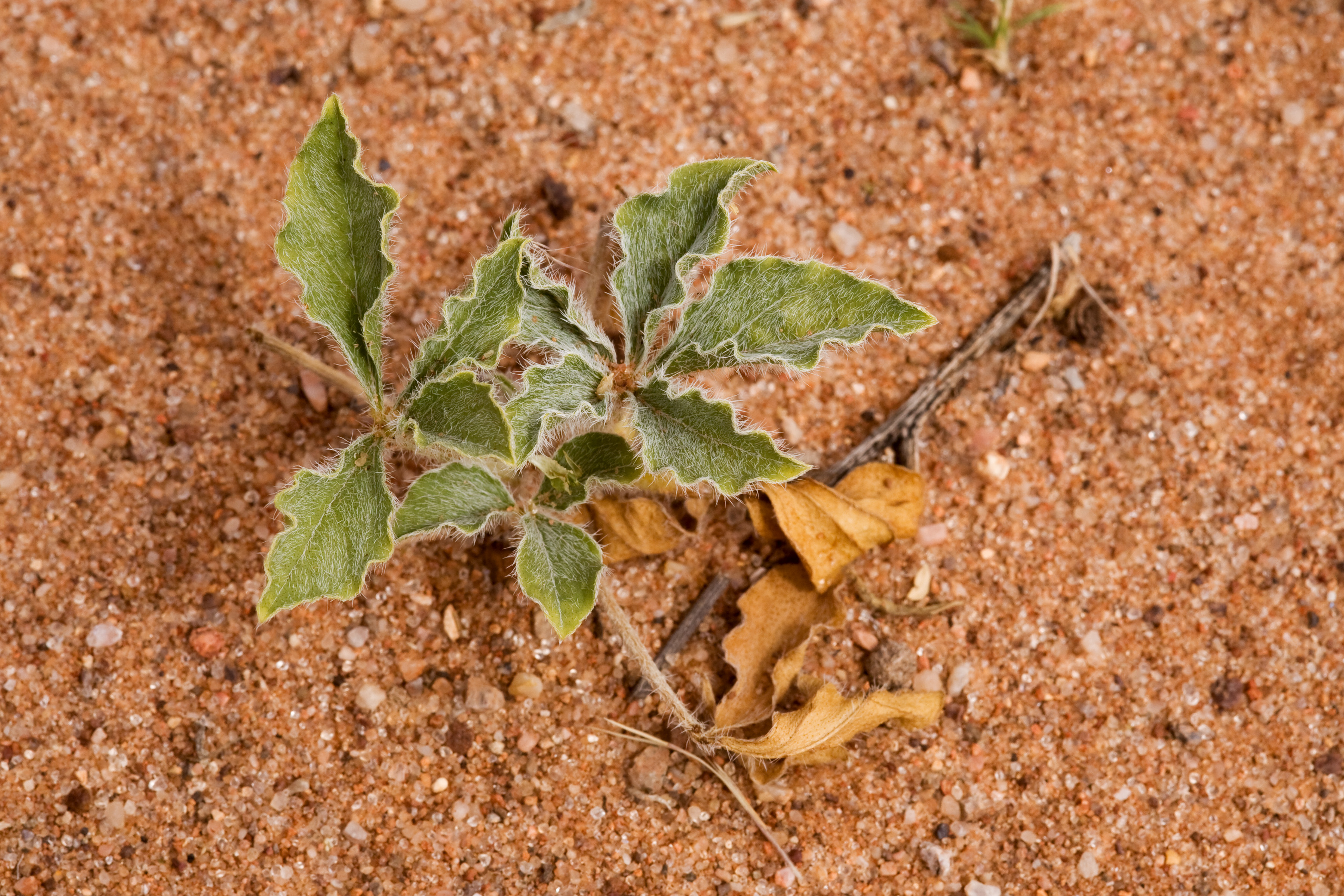 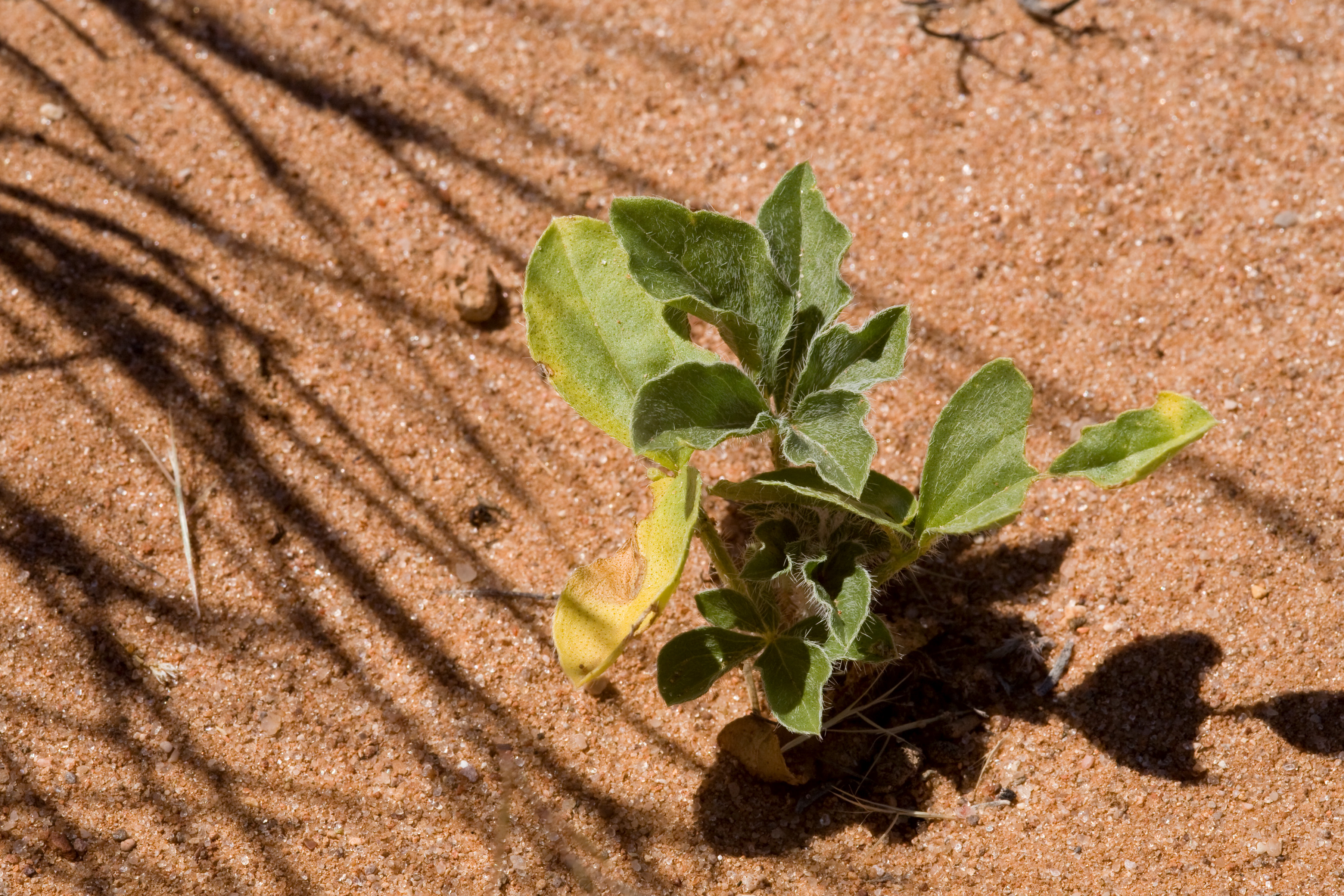 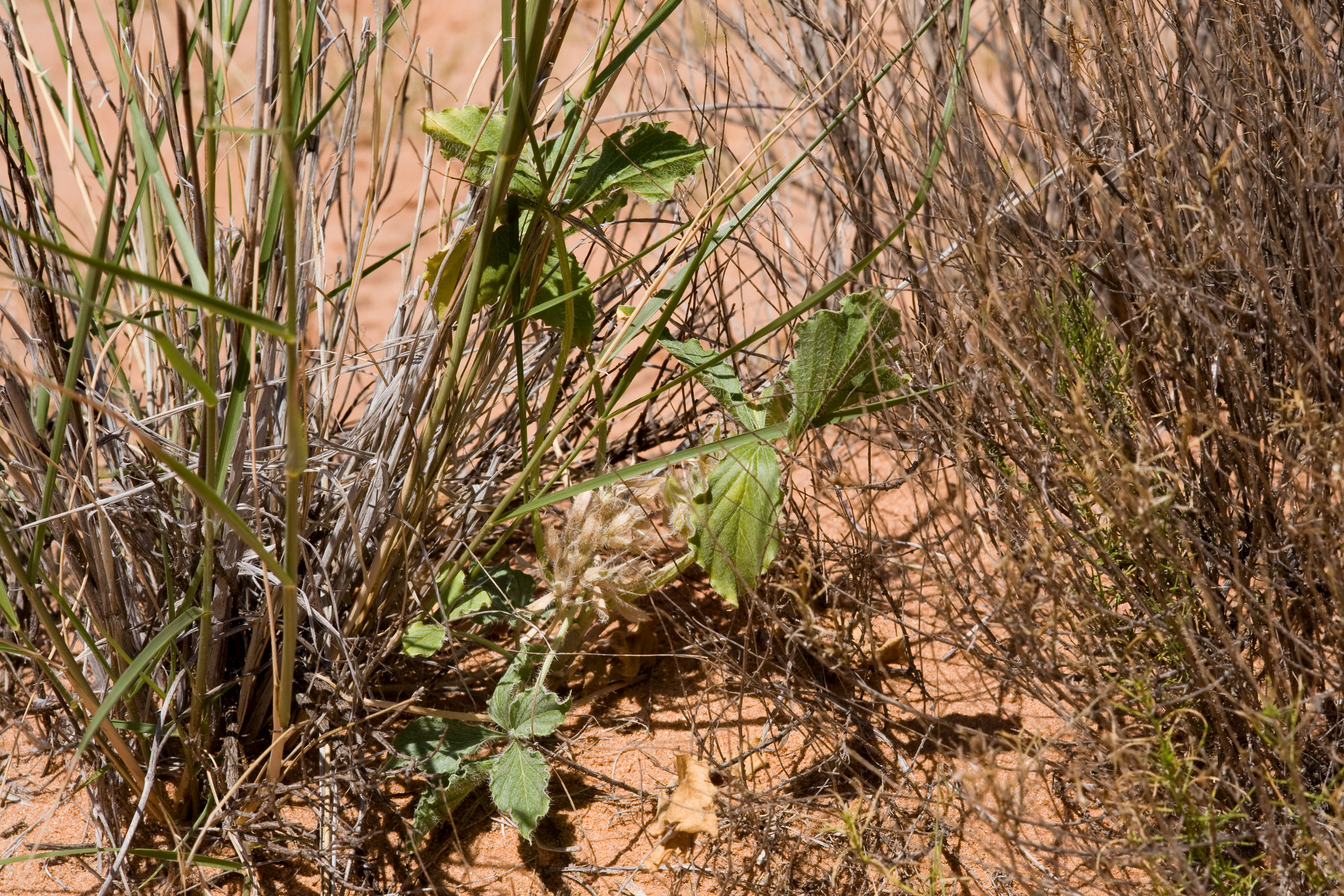 By the end of the day, the crew and I had found 29 of them. By the end of the survey, we had found about 270 across an area about 8 miles long and 2 miles wide northwest of Lordsburg on Lordsburg Mesa. Now we have four known, extant populations of Pediomelum pentaphyllum. This should also help us determine what habitat it likes. Our new population was in looser, dunier sand than the previously known populations, in Prosopis glandulosa / Atriplex canescens / Artemisia filifolia shrubland with a number of sand specialist plants that are uncommon in the area, including Amaranthus acanthochiton, Heliotropium convolvulaceum, Chamaesyce parryi, and Dalea lanata var. terminalis. Conveniently his habitat is fairly easy to spot on aerial imagery, so I’ve put together a list of similar areas to check. Maybe we can find a fifth population! 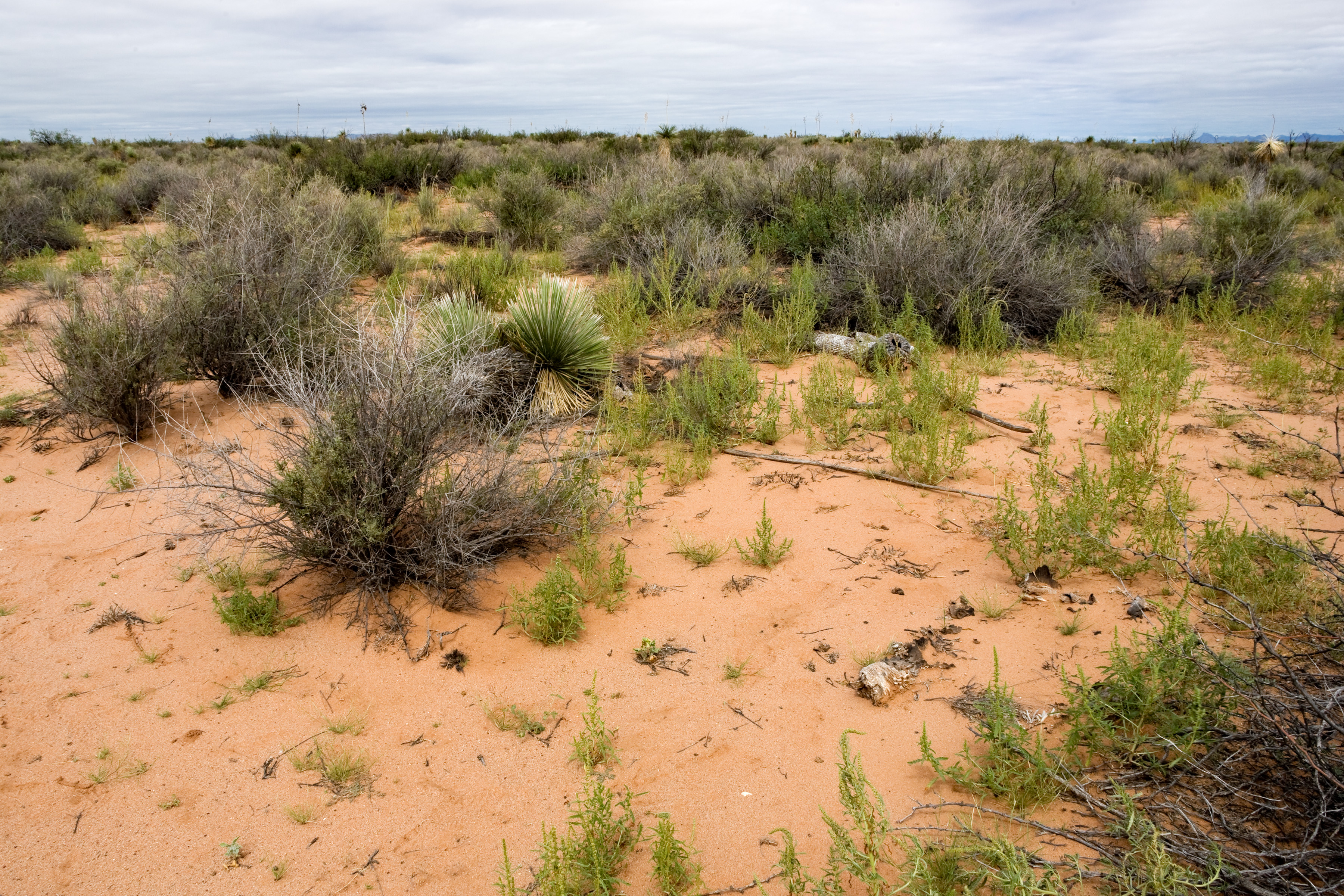 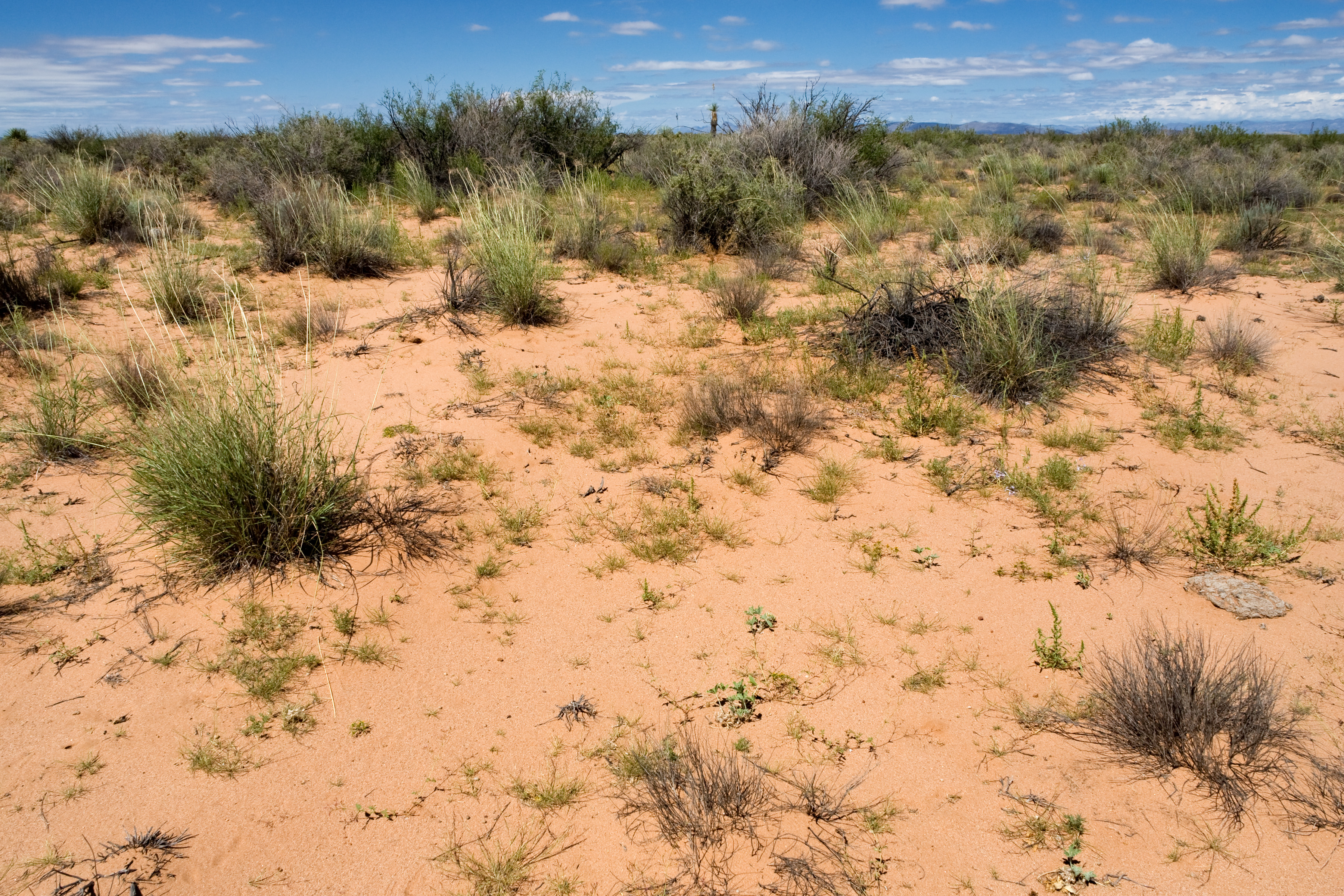 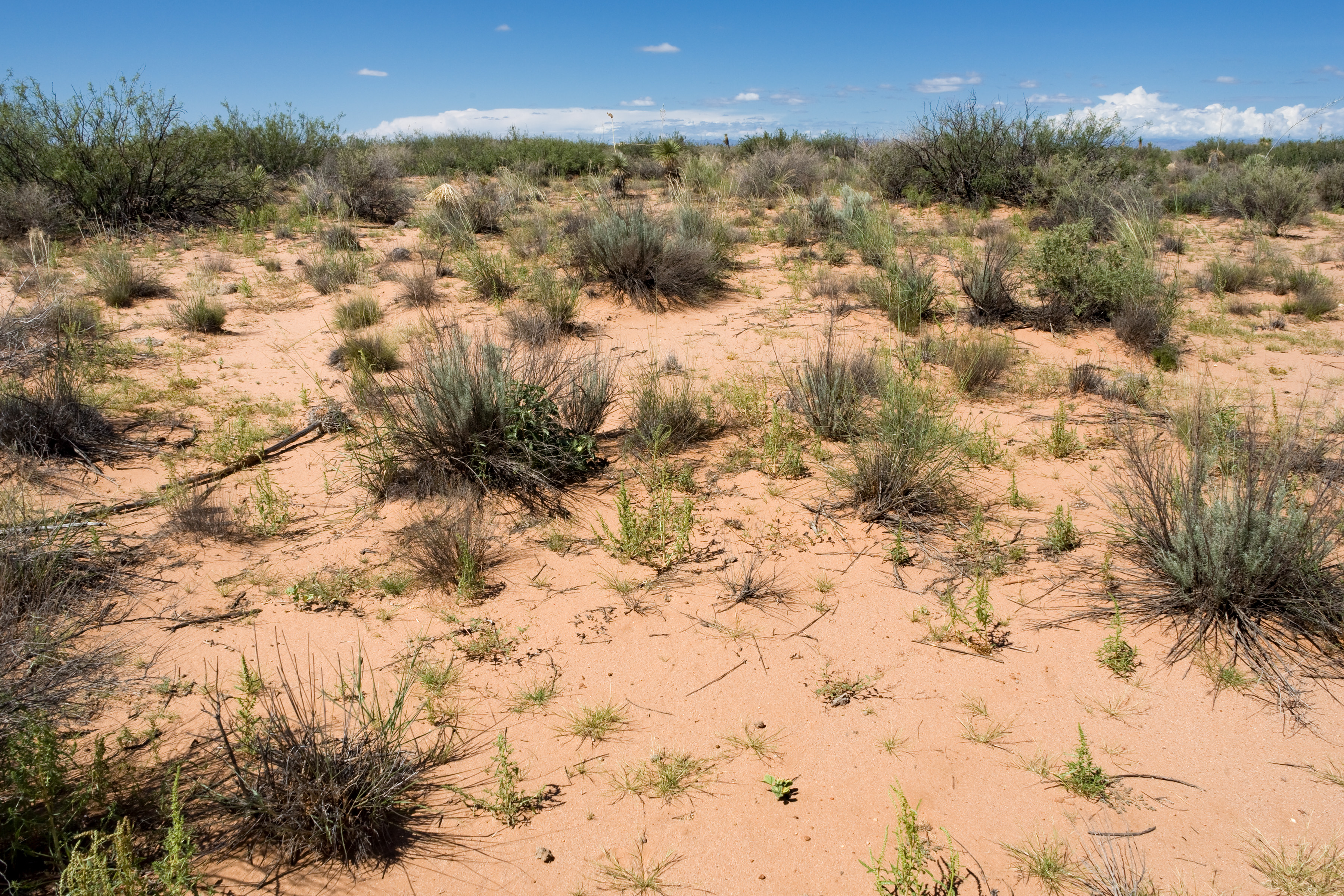 Some of the Pediomelum pentaphyllum was in flower, too, allowing me finally to get a good series of photographs of it: 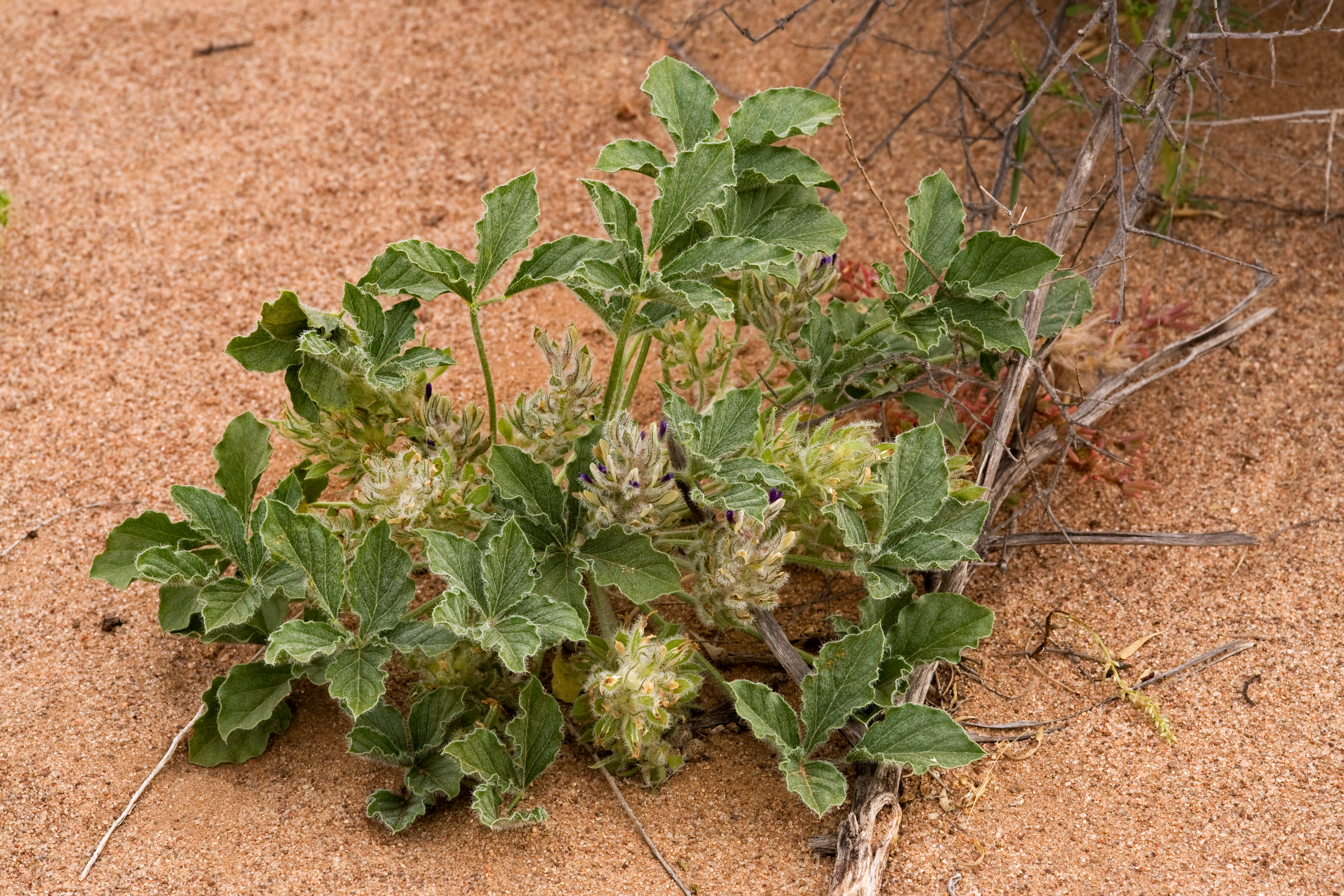 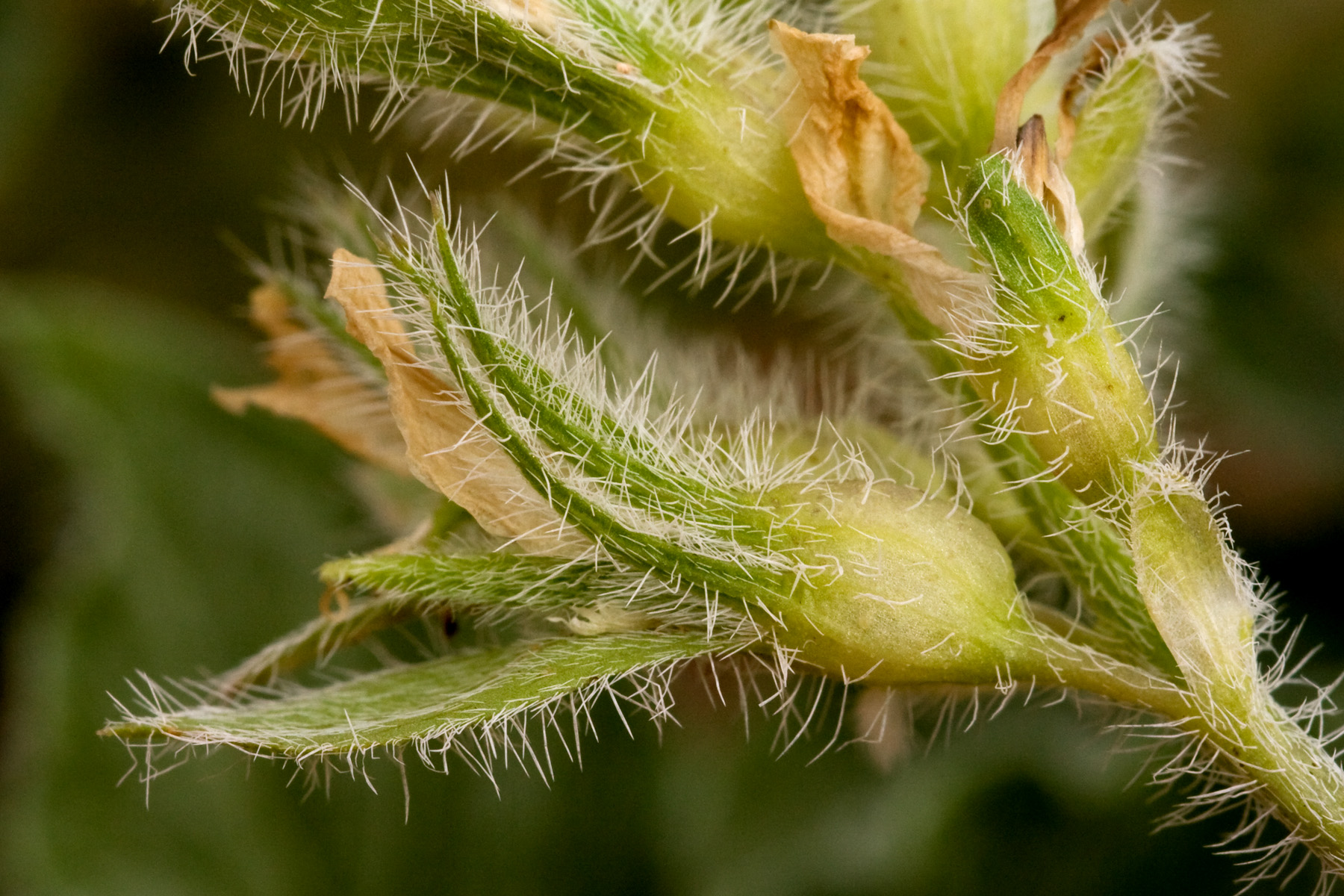 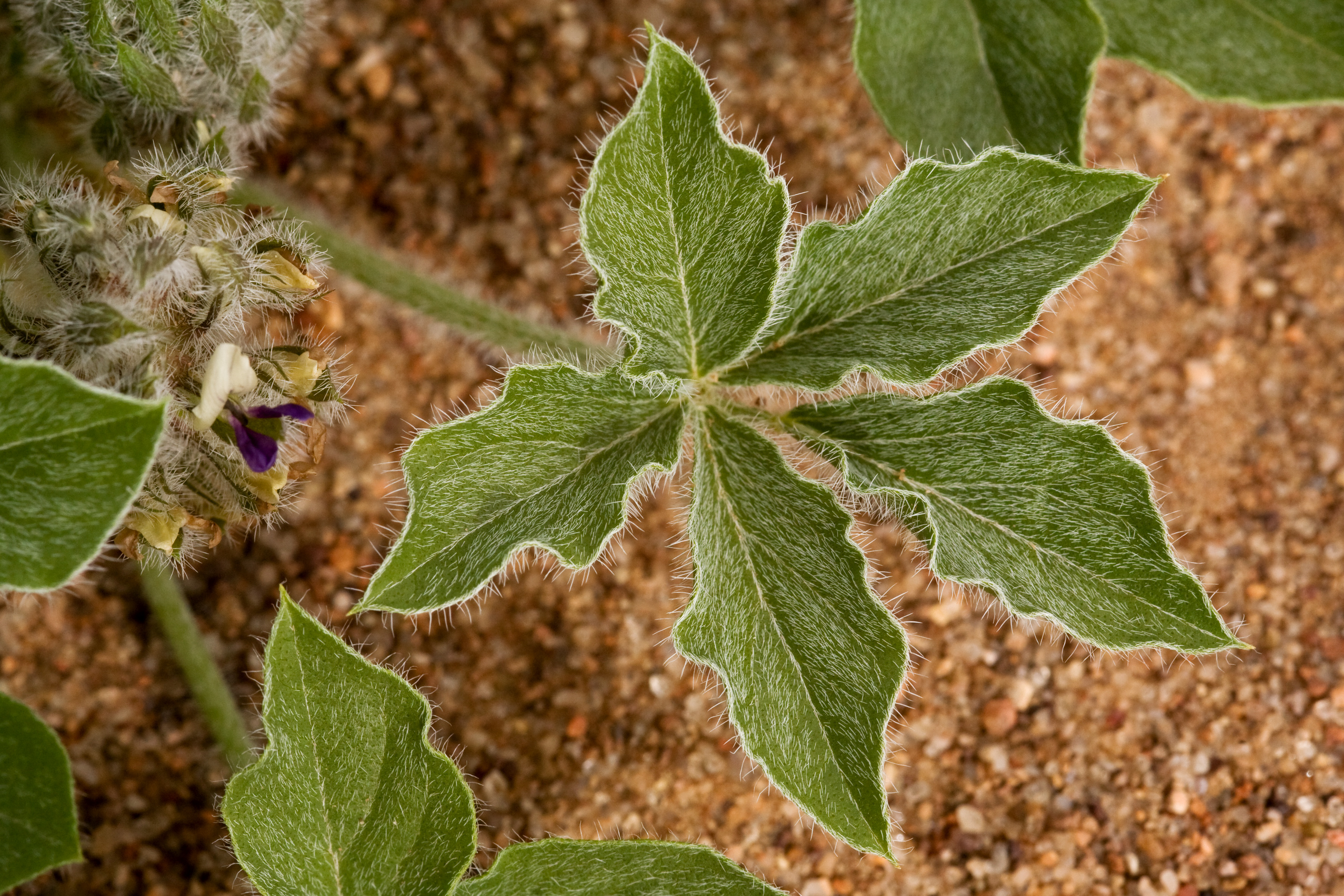 Other notable events in the field surveys:

First, I had the best field crew ever. Seriously, these folks were awesome. Here’s one of them (Jeanne Tenorio) taking notes Pediomelum pentaphyllum: 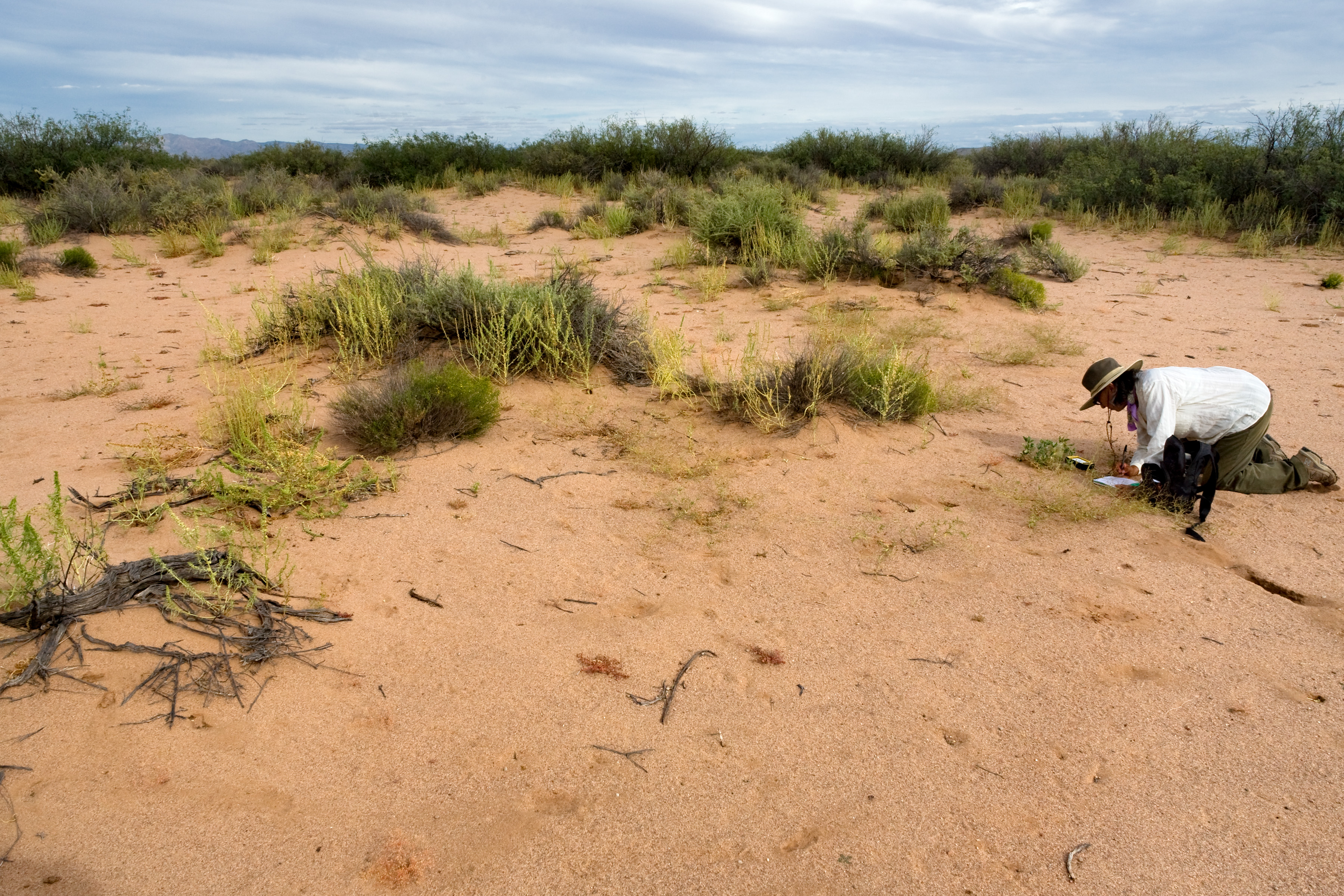 Second, we found a lot more Peniocereus greggii as well. I’ll spare you all the photos of them… at least for now.

Third, we found a bunch of other uncommon species, including four that are new records for Luna County, New Mexico: Simsia lagasceiformis, Mortonia scabrella, Ipomoea cardiophylla, and Anoda pentaschista. I also got to photograph a half-dozen species I hadn’t photographed before.

Fourth, we got stuck in the mud a couple more times. I forgot to take a picture of the first one, but here’s the second: 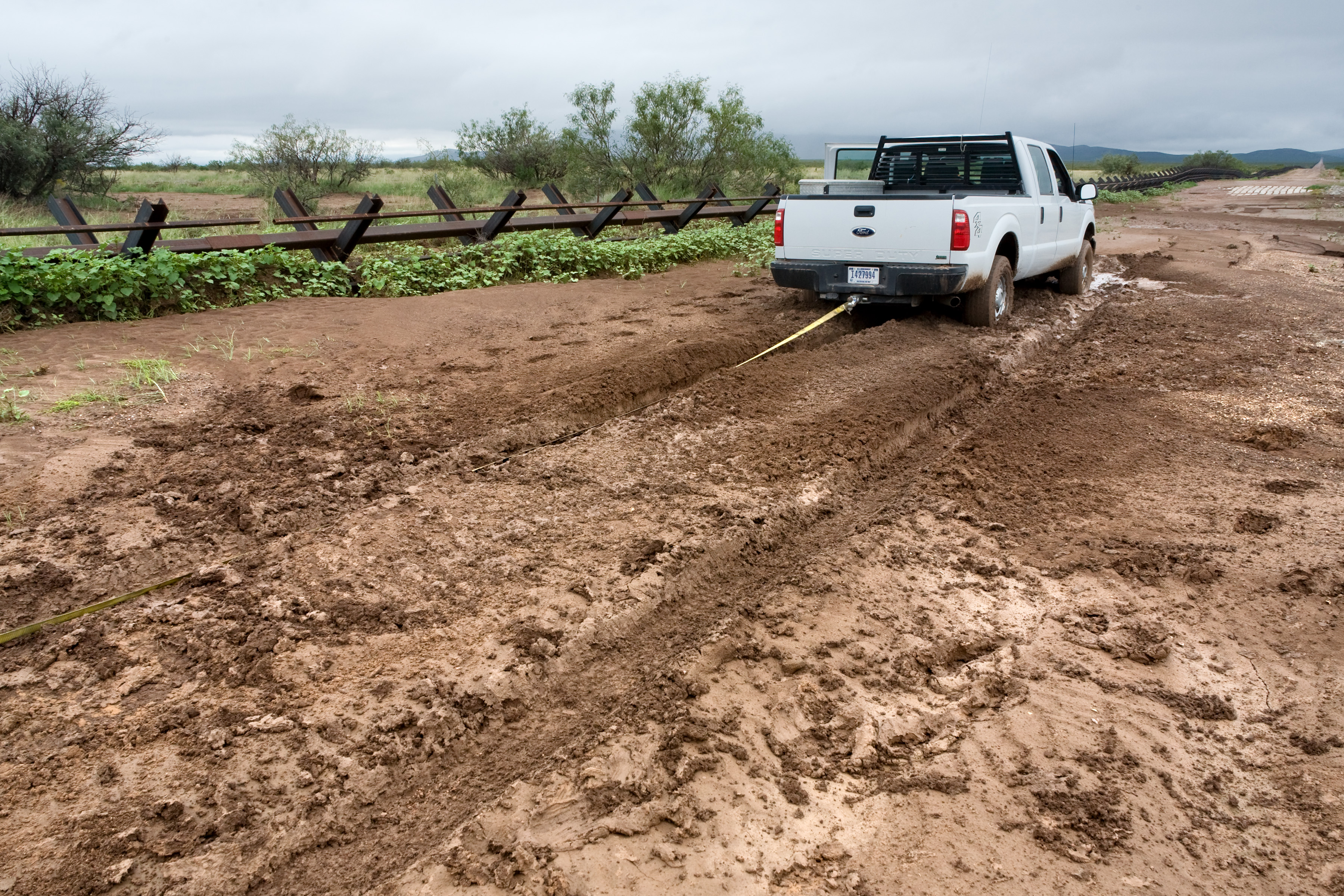 That’s the Mexican border at the left. On the border road, they’ve put in concrete blocks through the muddier parts and I was hoping these would be shallow enough that we wouldn’t just sink into the mud. I was wrong. Luckily, we had two vehicles and the second could quickly pull us out.

I was recently asked to help law enforcement with a marijuana clean-up in Clear Creek which is located in Central California. Clear Creek was an awesome experience, especially because not many people are allowed to go into the management area due to the naturally occurring high levels of asbestos.

From Fort Ord (Monterey Bay) it took about 3 hours to reach the gate to Clear Creek, and the road leading up to it had not been well maintained which made for a rough ride. We finally made it, however, and the BLM Ranger I was riding with got his gear ready as we waited for the rest of the team to show up. There were three clean up sites that had already had the marijuana removed but our job was to remove tubing (used for irrigation) and trash from the camp.

The rest of the team showed up, including another BLM range and a Department of Fish and Wildlife officer. Our team leader handed us a packet with information on how to execute the clean up; it was surreal to be involved in a project like this even though I am not a member of law enforcement.

After receiving our assignments, we proceeded to the opening of the grow site and waited for the helicopter, or “bird” as they called it, to show up. Once the rangers established communication with the bird, they dropped two more army personnel to assist with the clean up. Watching a helicopter land in a very small clearing like that was a really cool sight to see.

The trail was steep and our progress was slow-going as we scrambled down the trail to the heart of the site. I was required to stay behind everyone else, because I was the only person without a gun. They had done a flyby the previous day and hadn’t spotted anyone, so I wasn’t too worried about it anyways. We finally reached the grow site, and there was trash everywhere: cans, toilet paper, razors, ramen noodles, plastic…the list could go on and on. After I gathered the trash, the helicopter dropped two nets to collect it (this is the way the trash had to be removed due to the remoteness). This whole process was a rather shocking experience: the helicopter gets really low, its wind blows everything into your face, your hat flies off, and you feel like the “bird” and/or the nets are gonna fall right on top of you. Thankfully, they didn’t fall on top of us, and we quickly filled the nets with all the trash, and I learned how to hook them to the helicopter so they could be carried off. It was a lot of work, but it was also an awesome experience.

Until the next fun adventure,
Manny