This is most likely to be my last week here at the BLM in Medford, OR. My partner and I have finished the annual report and our final task is now sorting through our vouchers, performing quality control, and shipping vouchers out to OSU and the Smithsonian.

It’s been an interesting journey. While printing out maps and reviewing vouchers, waves of memories of the amazing landscapes and small adventures that were flew into my mind. I was reminded of how rewarding this experience really was. I learned an immense amount of knowledge and wisdom and had the opportunity to meet many people from across the pacific northwest that are involved in native plant seed increase, native habitat restoration, various research projects, and more.

I’m not sure what will be next. I’ll be spending my time finishing up my graduate program at Southern Oregon University and graduating in March with my M.S. in Environmental Education. I go back and forth about returning for another season next year. I feel ready to move on to something else, but at the same time I’m terrified of job hunting.

My interest these days is in encouraging the public to enhance their landscapes with native wildlife habitats and I hope to find some sort of work that allows me to do that in some capacity. I feel that my experience here has given me the experience necessary to move in that direction, given the numerous ecoregions, habitats, and microhabitats that we have explored along with the botanical surveys we conducted at all of these locations. I am especially interested in figuring out how to get native plant materials to the general public in a more accessible and affordable way. I have also had the opportunity to do mycological education with kids and adults recently and I would very much like to lead educational mushroom hikes next year during Spring and Summer.

At any rate, so life continues.

I wish everyone the best in whatever it is they end up pursuing. But above all else,

October 25th was National Public Lands Day.  This is the day the public gets to volunteer for a couple of hours in the back country. Afterwards, everyone gets to mingle, eat food, and listen to some good music. It was nice to see the public interacting with everyone from the BLM. It’s always nice to feel appreciated for all the hard work we do managing the trails and the land. Although it was a lot of fun, it was also a lot of hard work.

The week leading up Public Lands Day, we each had specific tasks in order to prepare. One of my tasks was managing the volunteers at the new restoration site on Oil Well Road (it was being restored to decrease water channeling that was causing a gully). The heavy equipment crew had worked all the way until Thursday afternoon. I only had a few hours with the Weed’s Crew (Kelly, Daniel, Alex, and Ryan) to prep the site for the volunteers on Saturday. The plan was for the volunteers to drive up to the site and broadcast seed with sterile Barley (for soil stability) and cover the bare ground with straw (to provide protection for the seed and control erosion). With about two hours to go, the crew and I had to place one bale of straw every 800 feet to provide the right mount of cover. This was a lot harder than it sounds; the bales are awkward and heavy and it basically took two people to move each one. We also had to measure 20×40 feet to know where to place them. That turned out to be way too slow, so we began placing them 10-12 steps away from each other, figuring that the prior ones had roughly that much distance between them. However, even at this point, we still had to move over 200 bales of straw on a huge and steep restoration site. Obviously we didn’t get it done, and on Friday I only had Daniel and Alex to help me. We must have moved over 100 bales of straw, rotating with each other every so often to catch a break. We didn’t end up finishing the whole site, and then to top it off we also learned that it could potentially rain on National Public Lands Day. We figured that our volunteer turnout wouldn’t be as large if it did rain, and therefore they probably wouldn’t finish the entire site anyways.
My other task was placing BLM special event signs from the highway all the way to the back country. I met up with my mentor at 6:30 am on a SATURDAY and began placing the signs while it was still dark. As we are driving and placing the sign, he reminded me that we also needed to set up four plots to test the limited amount of Elymus glaucus seed! I raced up and began setting up 15.9×47.7 meter long plots on the site, which was difficult because it had begun to rain and the mud had caked on my boots and made them feel like 10 pound weights on my feet. By 10 am, I had them set up and as the volunteers arrived I gave them the run down of what the site was and what we are going to be doing. There ended up being about 15-20 volunteers that made it to the Oil Well restoration site, and they got about a quarter of it done.
We stopped, cleaned up, and took a group photo, then headed down to the festivities.
Two summer interns – Mandy and Stephan -got awards for all their hard work, and I was really happy to see them again. After we all ate, I had to run off and collect all the signs. Luckily for me, traffic was light.
I slept well after that day.

There have been some more exciting developments in the land of Pediomelum pentaphyllum, which I’ll probably discuss in more detail in my next post. The short version is that there were previously two broadly-defined populations known in Arizona. Now there are, depending on how broadly you want to define them, four or five! Put that on top of the new population we found in New Mexico, and we’ve gone from three populations to six (or seven) this year. It’s still rare, but it’s looking like Pediomelum pentaphyllum is at least in better shape than we thought. For the next few days, I’m going to go look for more–amazingly, they’re still up, at least in southeastern Arizona. This goes on my list of reasons I love the southwest. Not too many places have good botanizing in November!

For the moment, here are some photographs of another rare plant in the Las Cruces District. On the 21st of October, I went out to Alkali Lakes to tag along on a research trip by Evelyn Williams of the Chicago Botanic Garden. Evelyn has been studying Lepidospartum burgessii. This is a rare shrub found only on gypsum, in two populations on the west side of the Guadalupe Mountains (one in New Mexico, one in Texas) that has been the focus of research on both its population genetics and reproductions. It rarely (if ever) produces viable seed and has been difficult to propagate from cuttings, but we might have gotten some good seed on this trip–the rate of apparently well-developed fruits is very low, but perhaps it isn’t zero.

The New Mexico population is at the Alkali Lakes Area of Critical Environmental Concern, an area of low hills of gypseous clay around low, dry depressions (a.k.a. “lakes”). Lepidospartum burgessii is not an immediately appealling plant. From a distance, it looks like a fairly anonymous grey shrub: 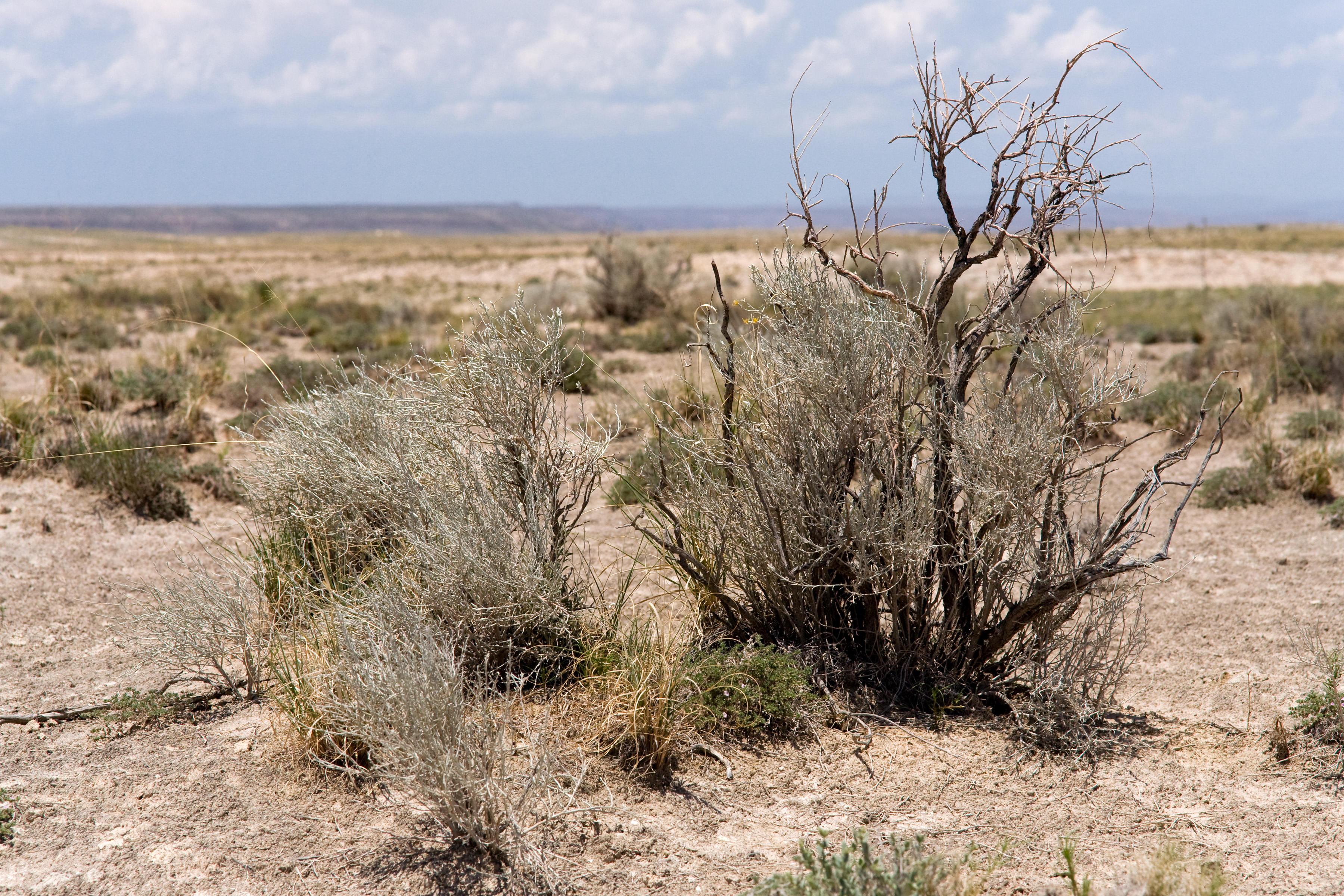 On closer inspection, though… well, it still looks like a fairly boring shrub, to be perfectly honest, but it does have nice little yellow flowers rather like those of Ericameria nauseosa: 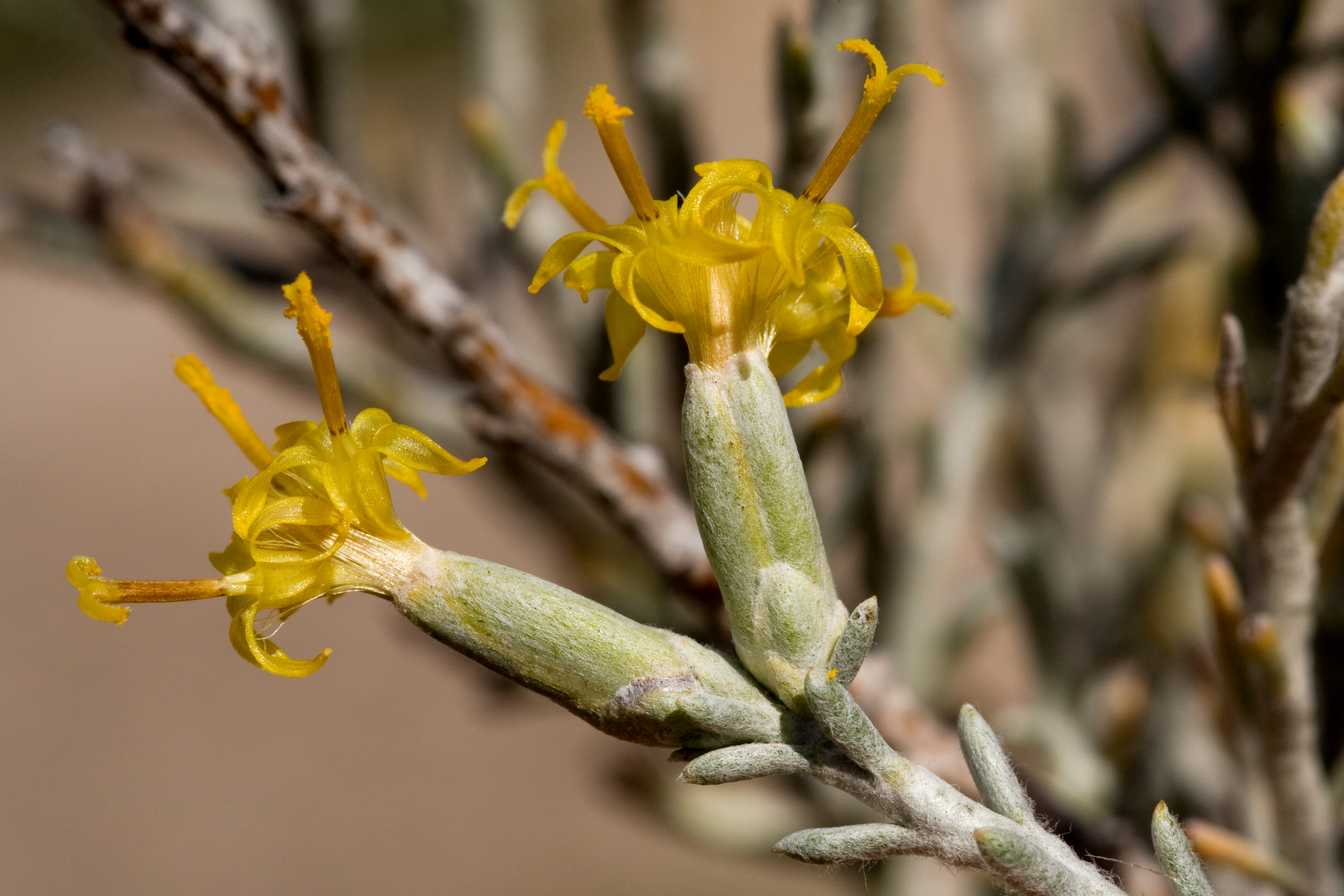 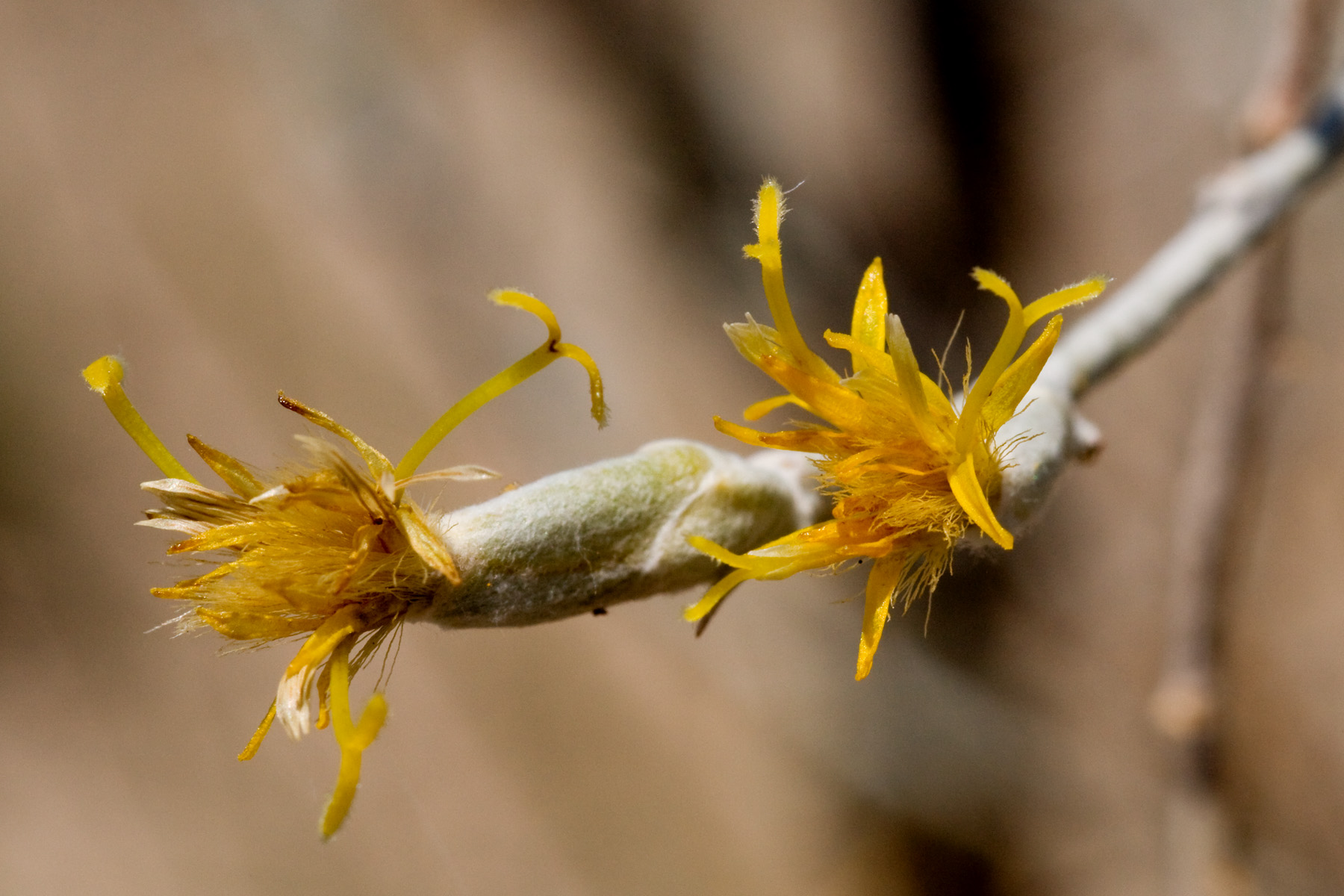 Later, it has nice fluffy pappus which is attached (unfortunately) to mostly shriveled empty fruits:

The Alkali Lakes is also home to a variety of other uncommon plants that are found only on gypsum, including Senecio warnockii: 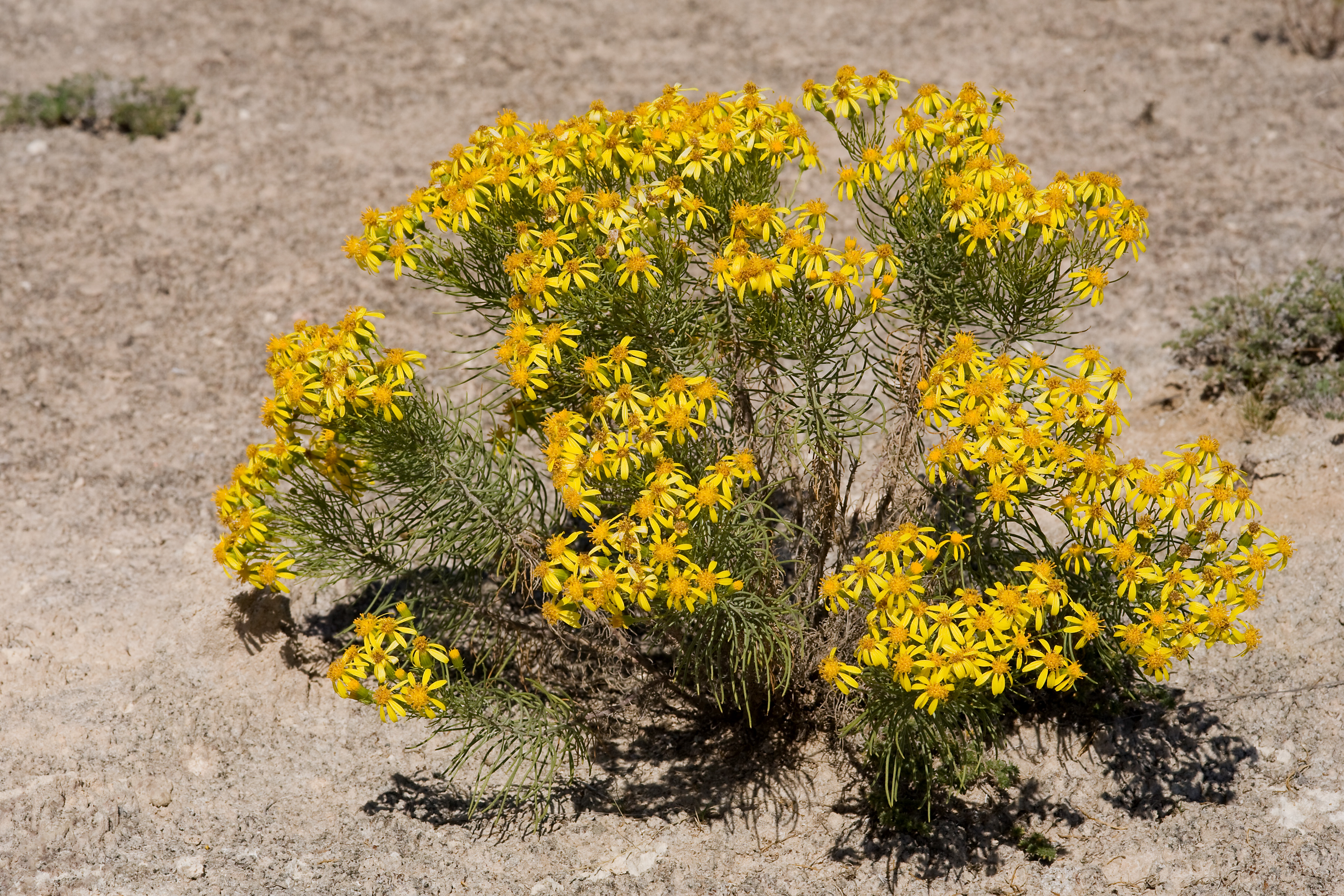 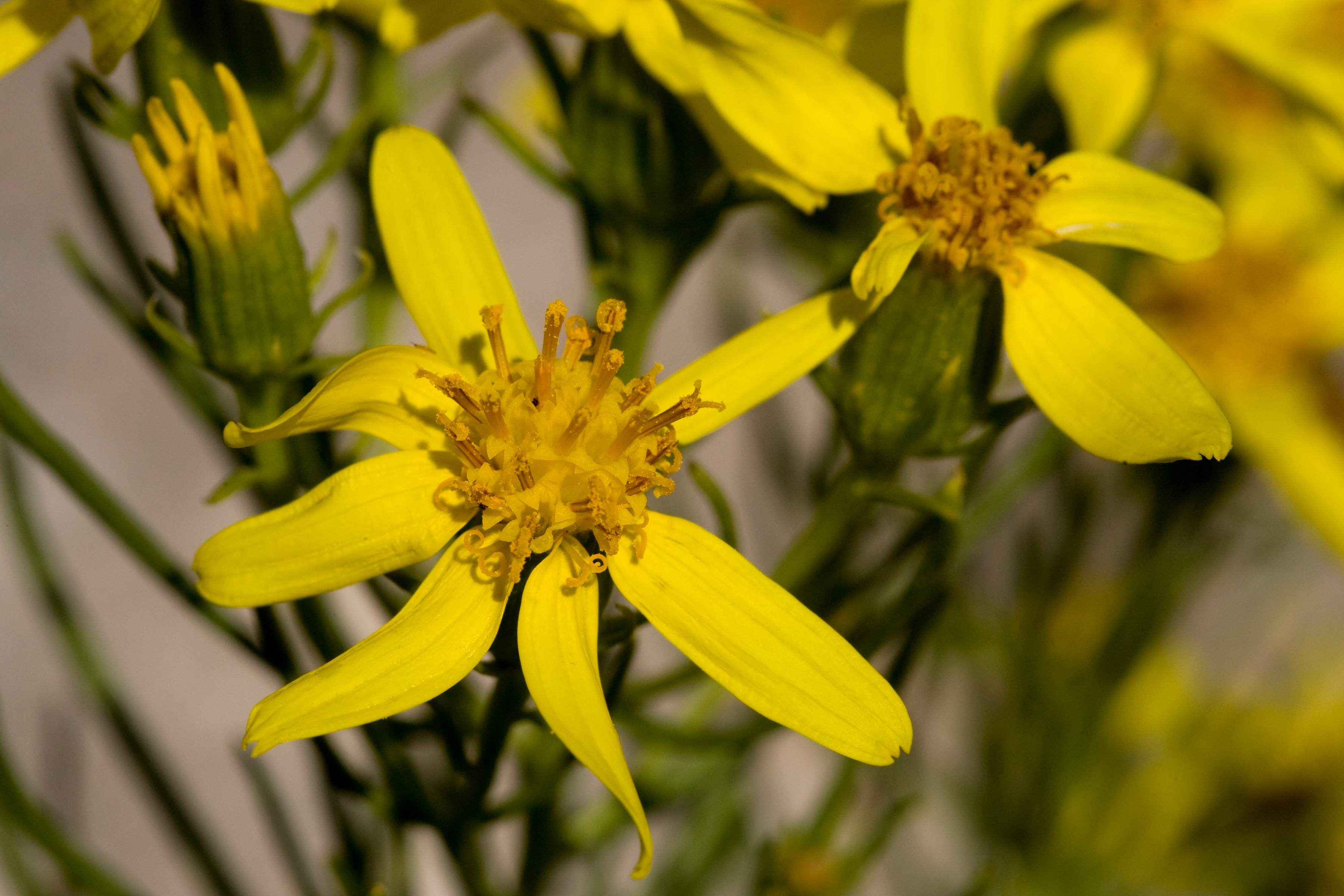 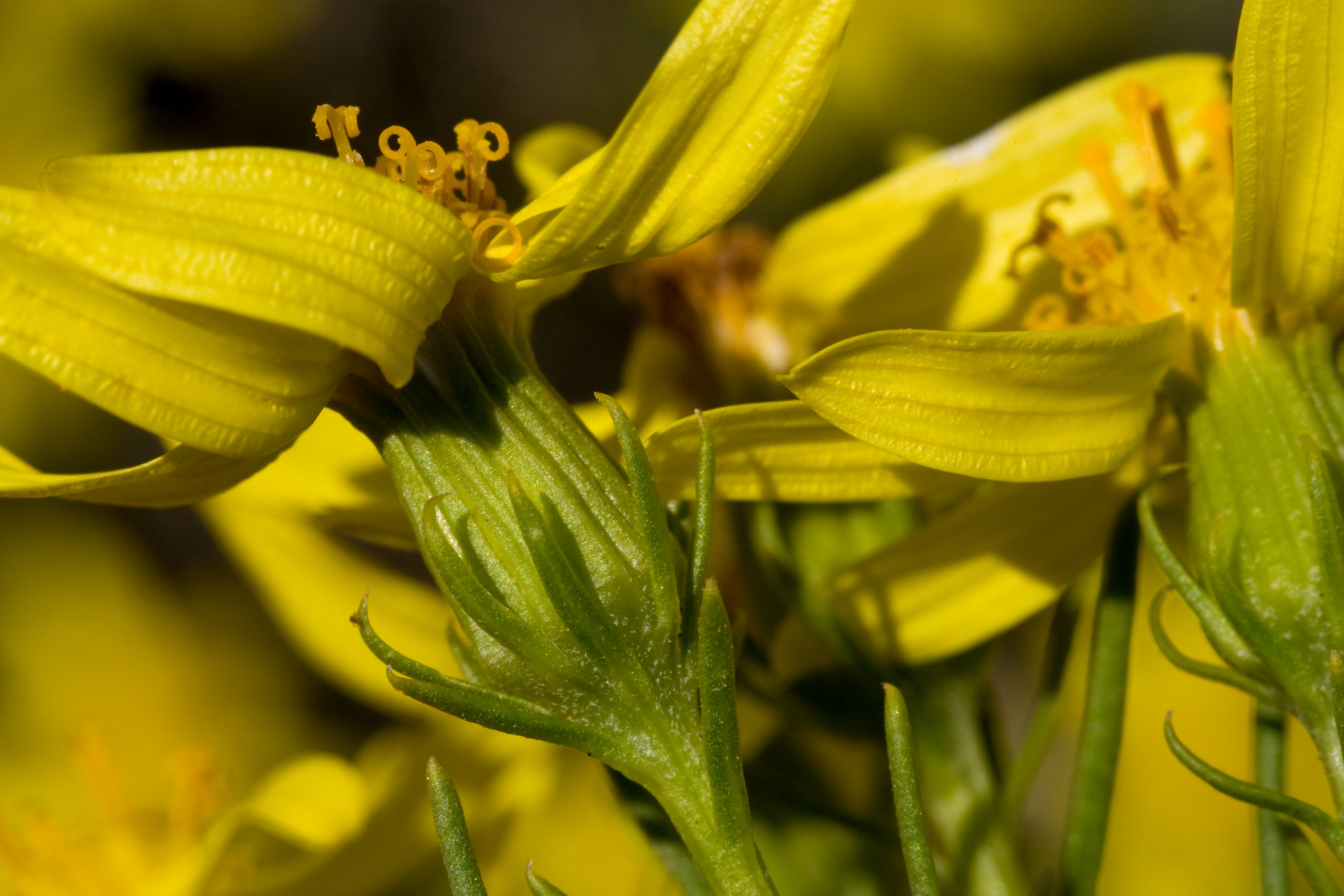 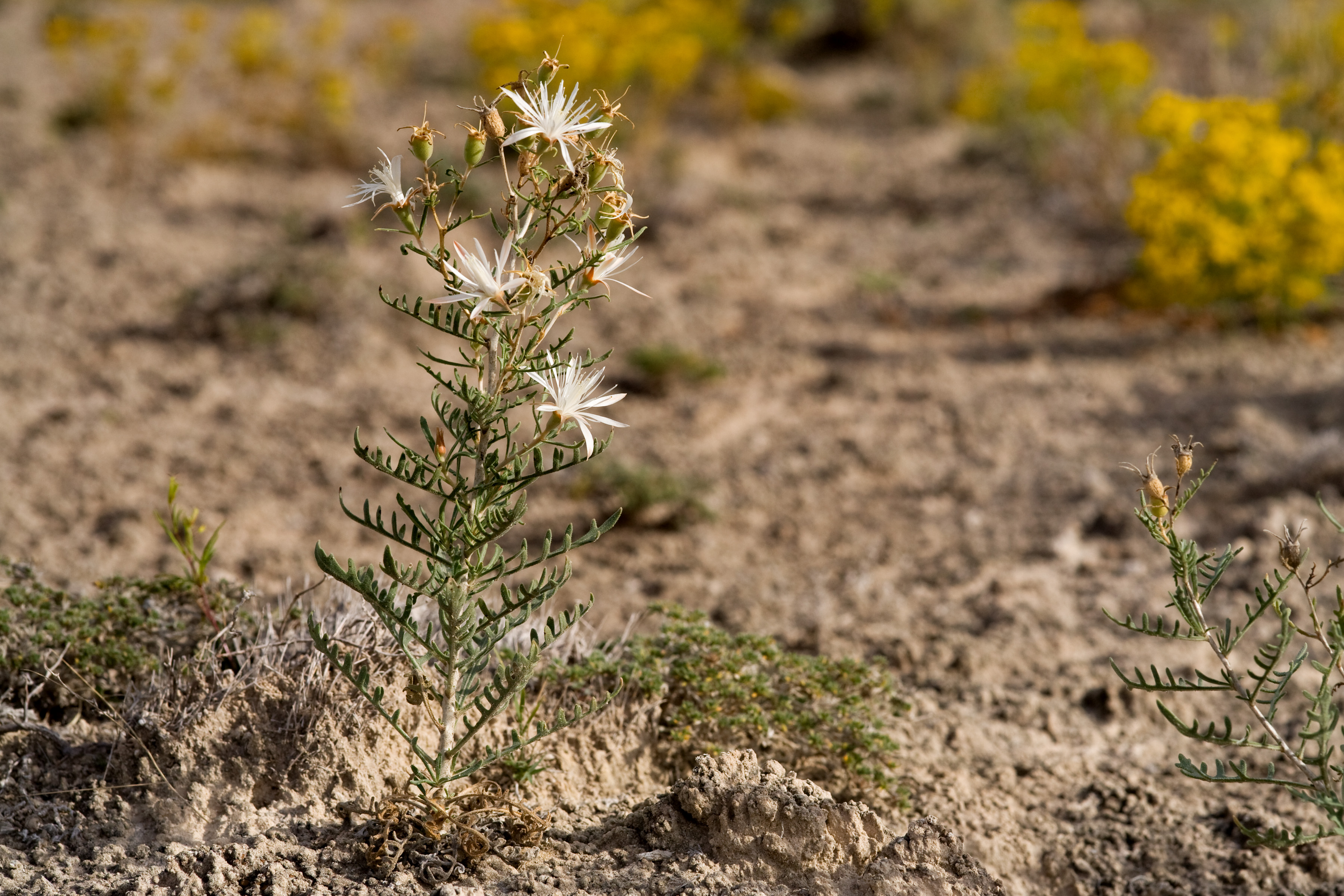 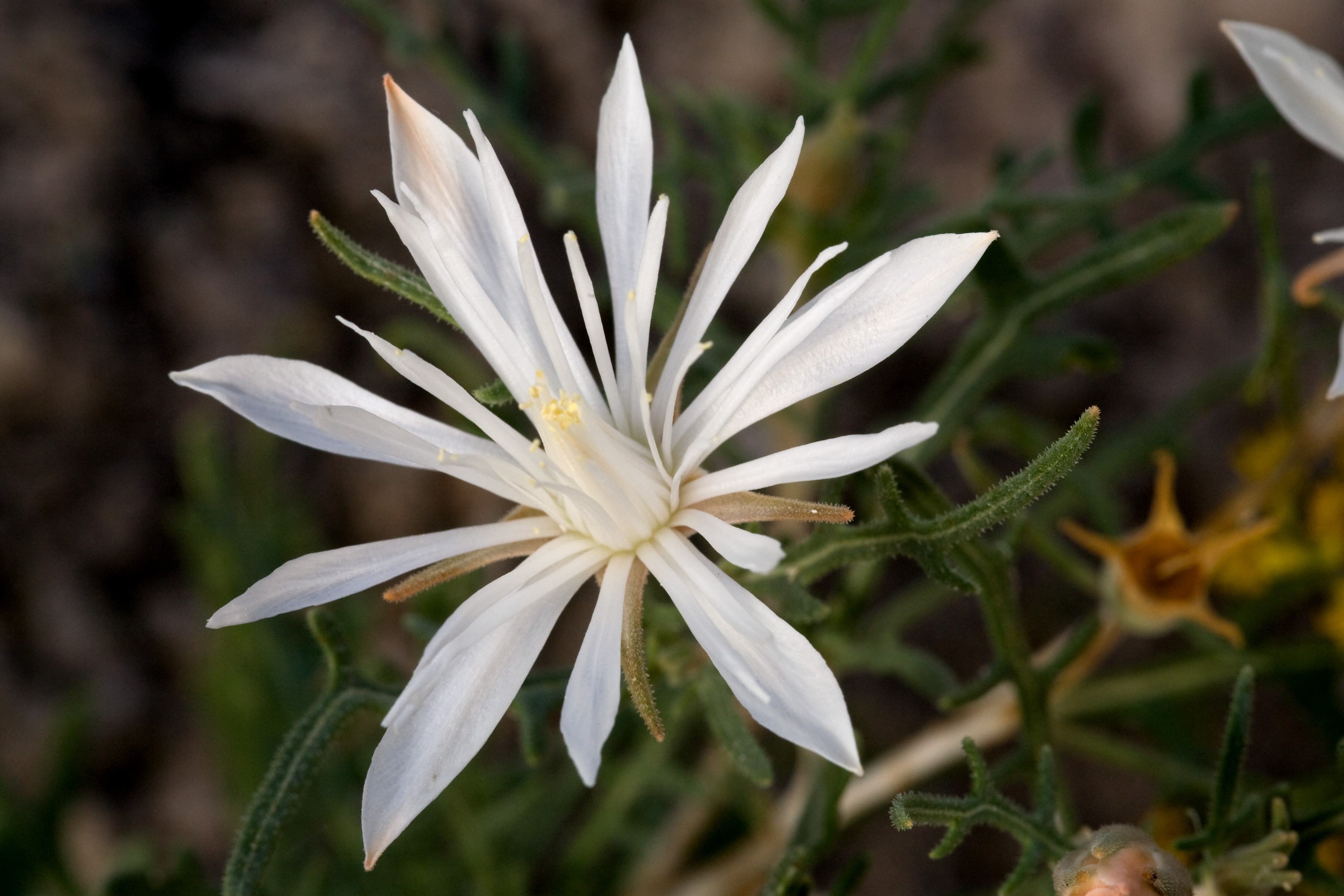 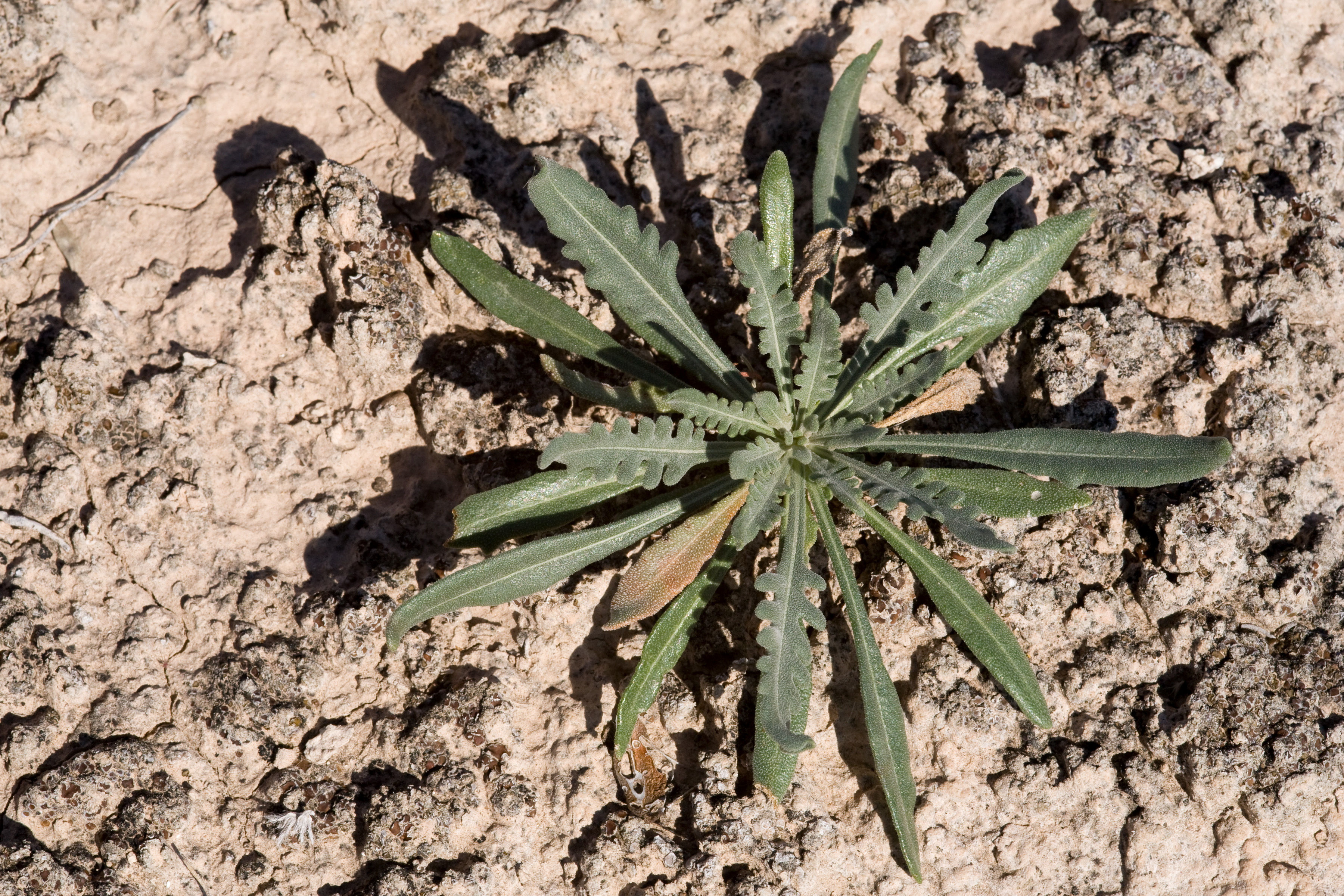 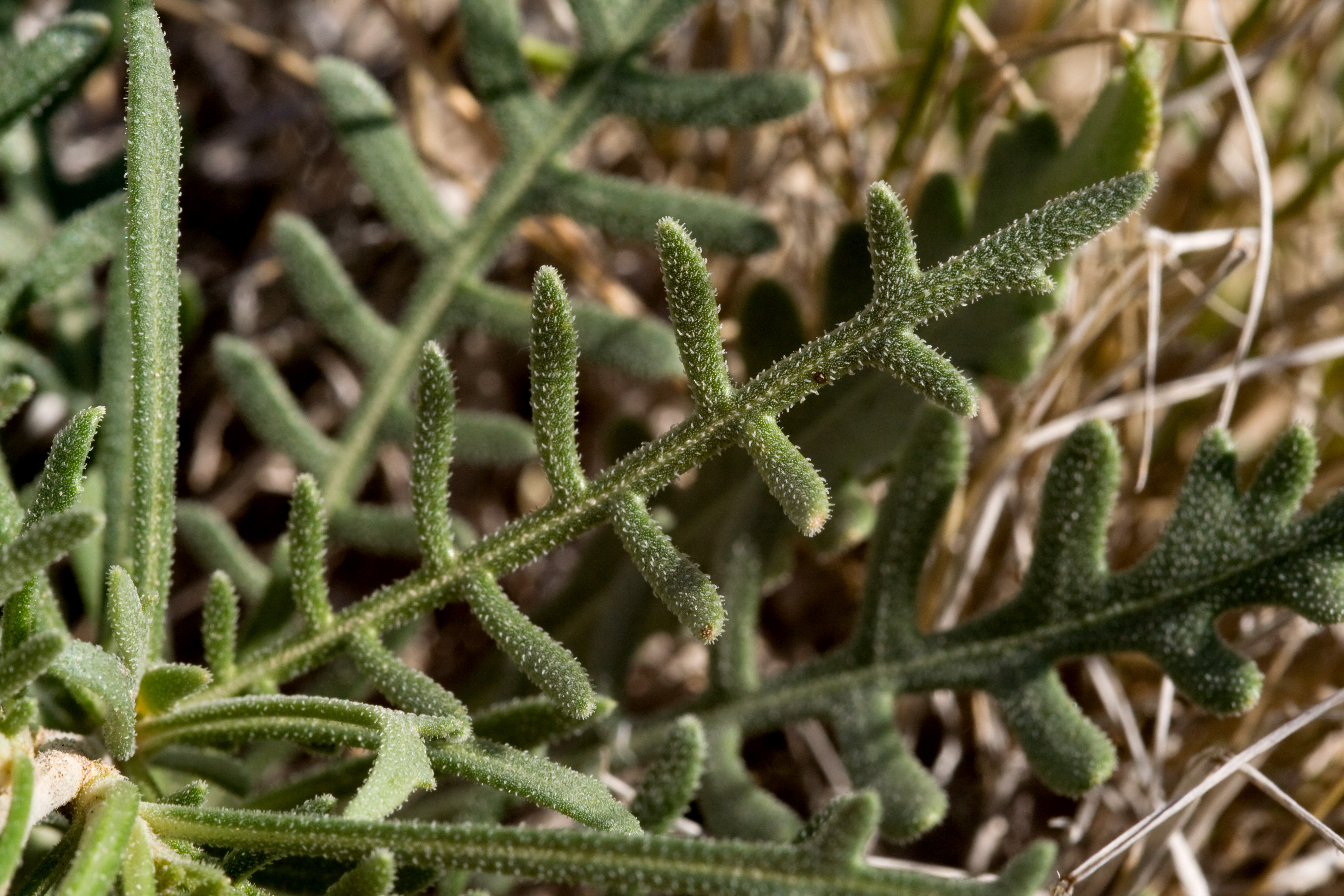 Another rare plant in the area, although not an obligate gypsophile, is Coryphantha robustispina var. scheeri: 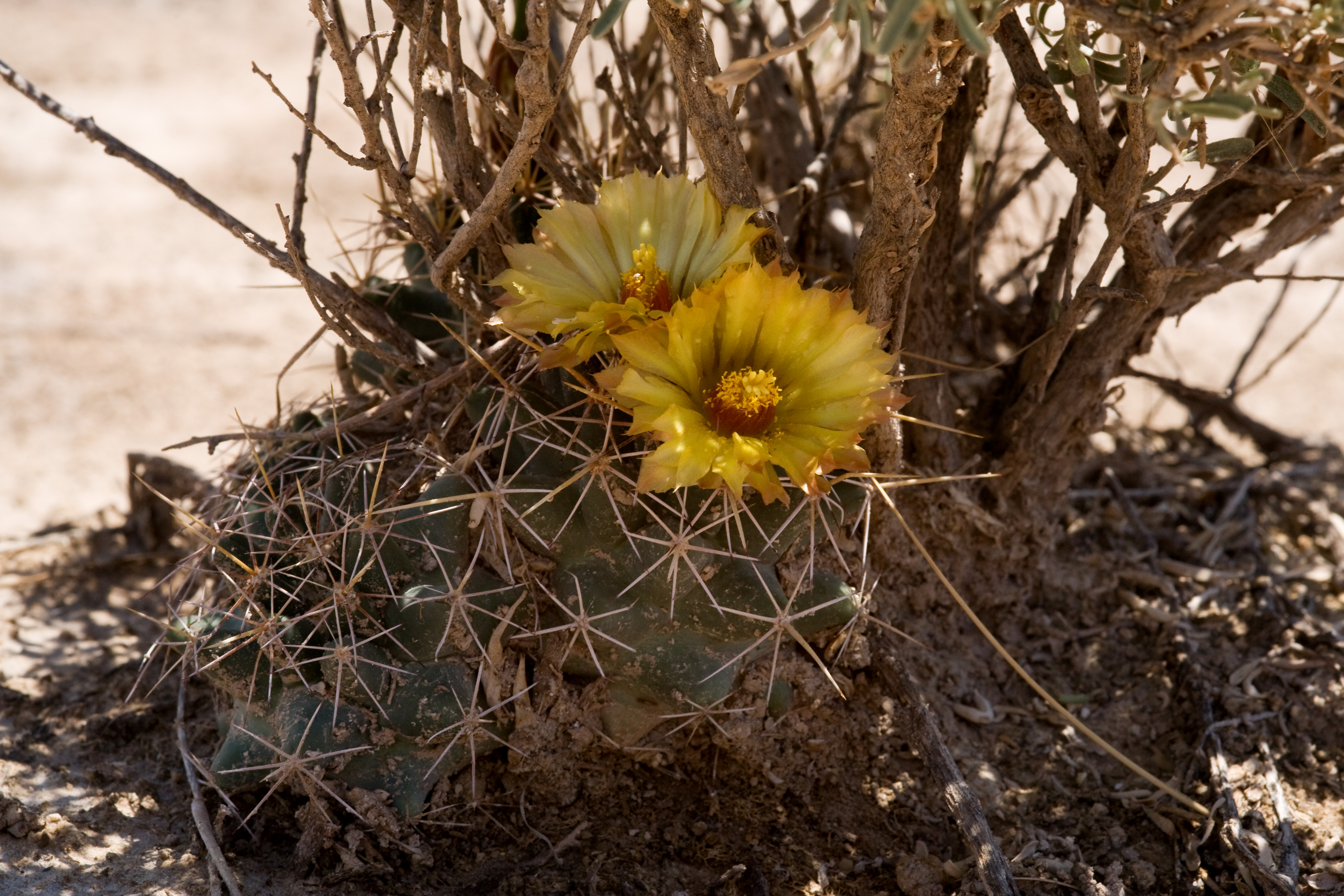 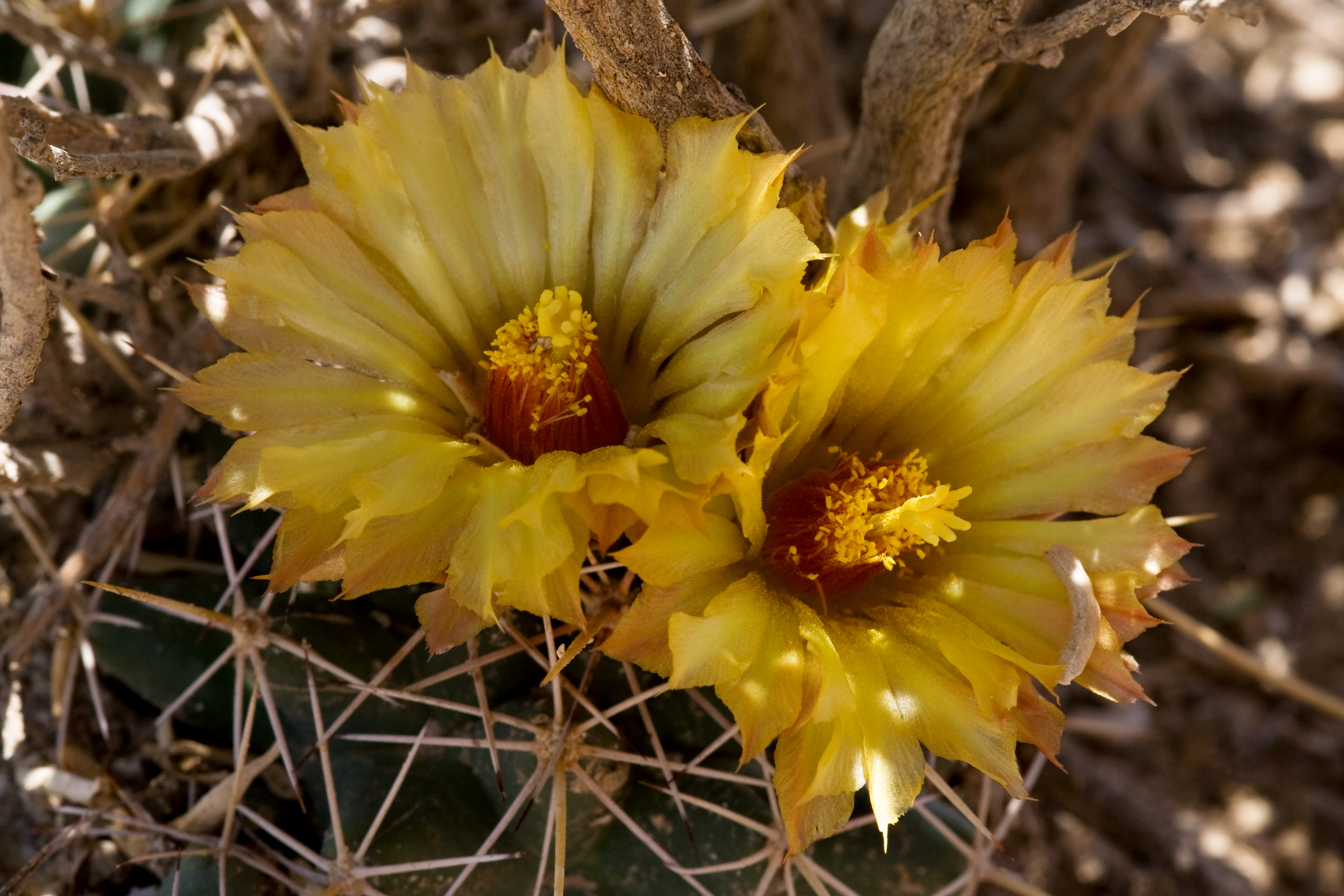 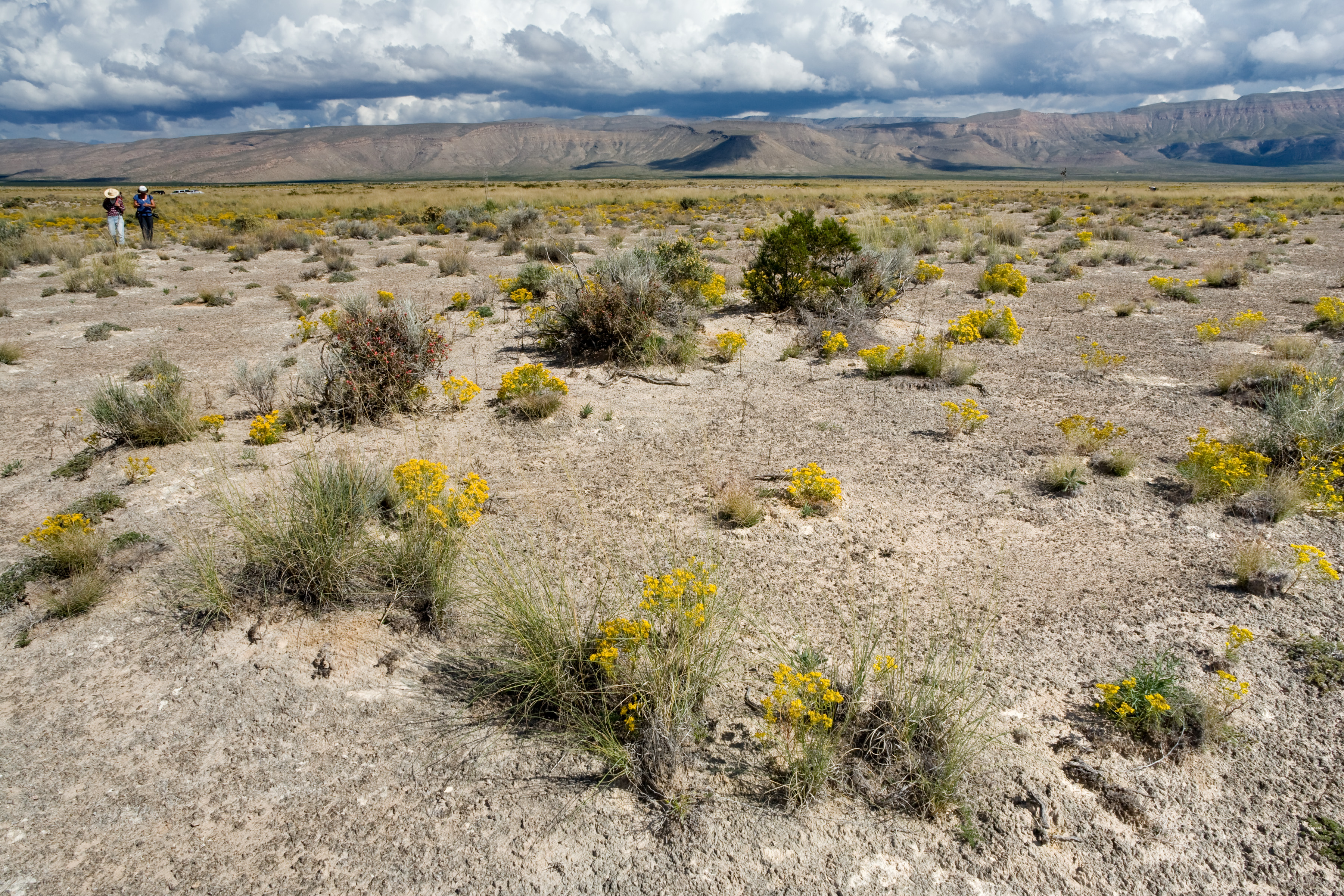 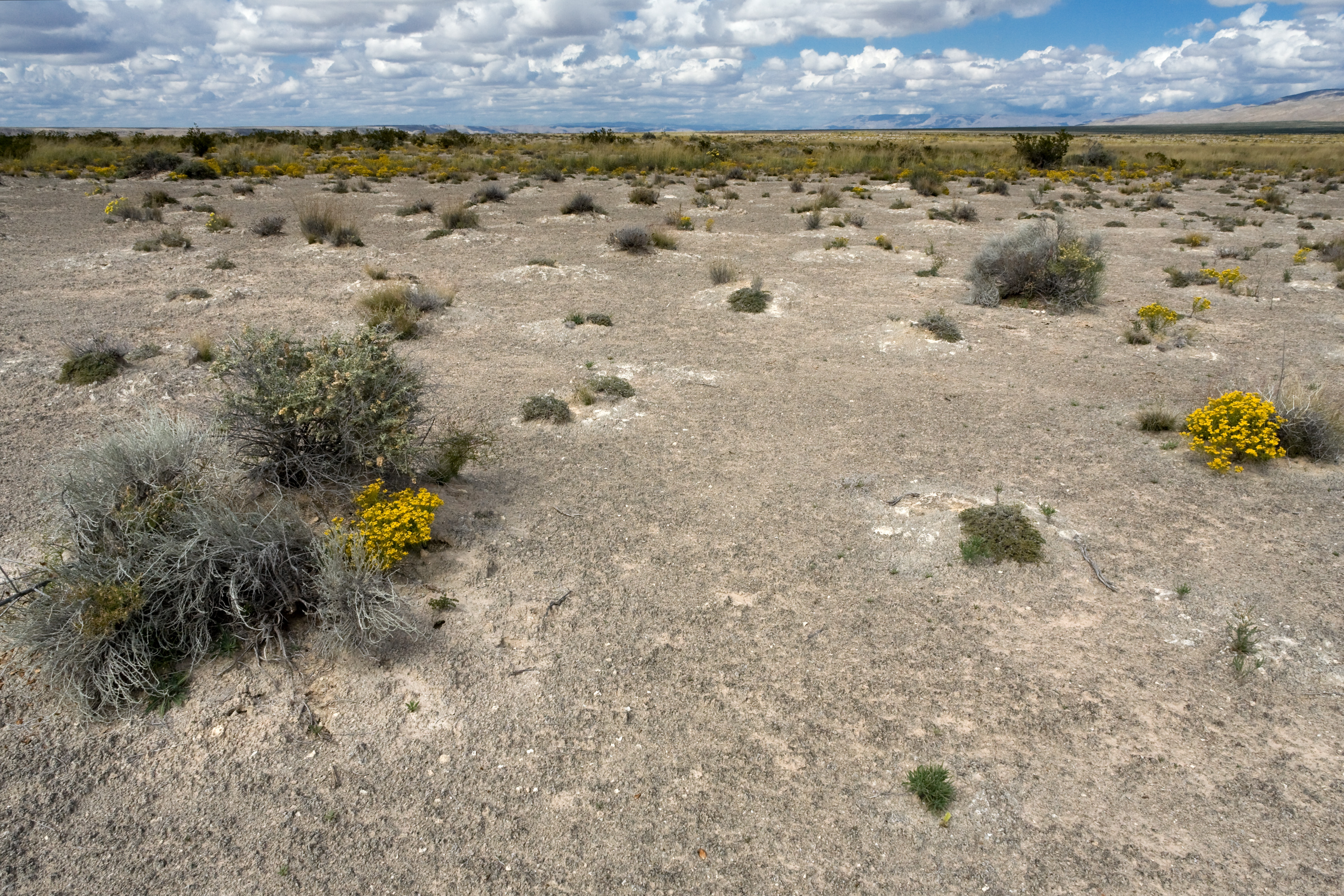 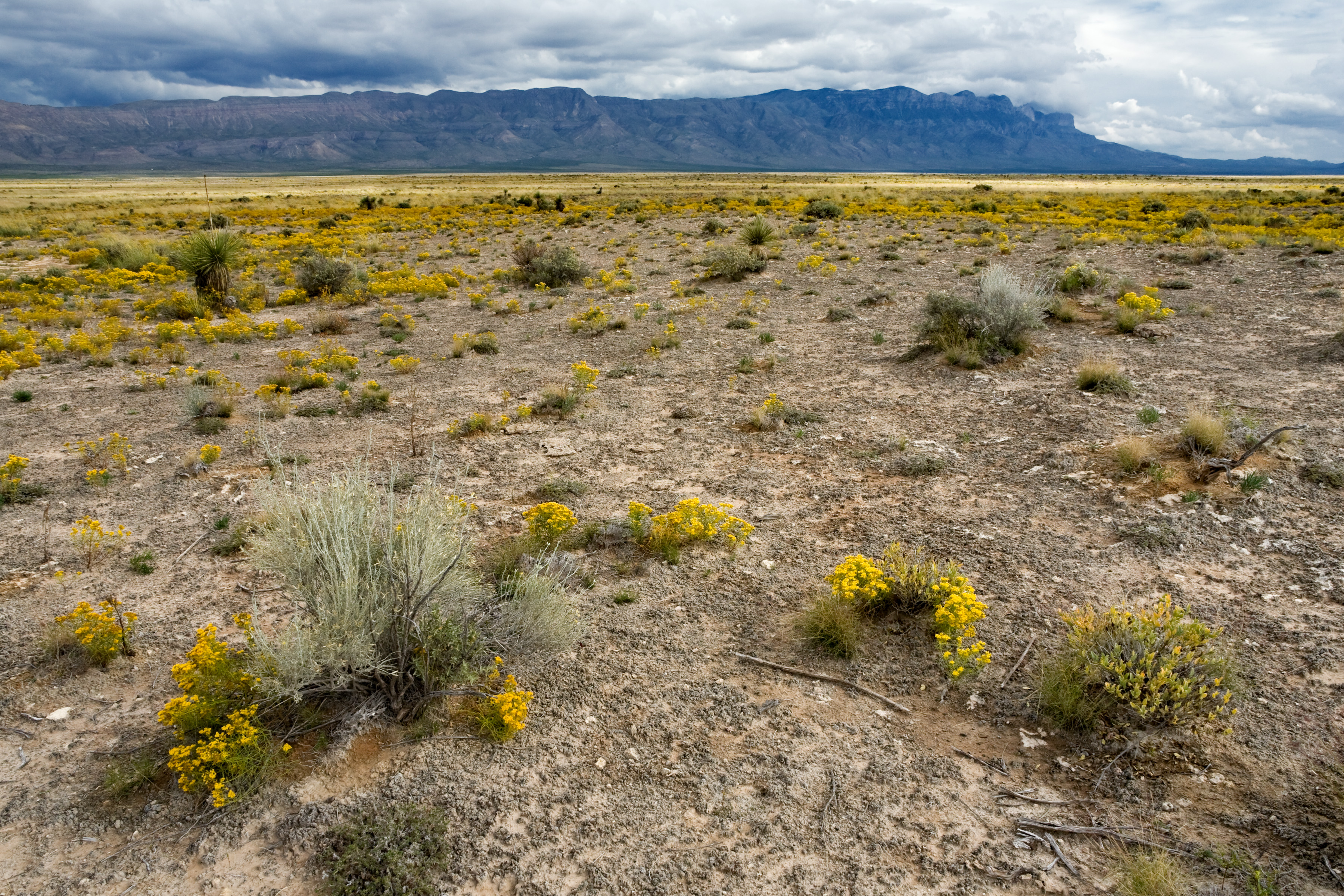