The right seed, in the right place, at the right time.  This straight-forward goal was synthesized by the Colorado Plateau Native Plant Program, at a conference in Monticello, Utah. It assimilated a broad range of presentations, including the latest research on local plant genetics intertwined with climate variability, new conservation technology, and agronomic requirements for successful seed production. This simplistic goal resulted from a conversation of the various stakeholders involved with collection and production of native plants for habitat restoration.  Often, the center stage of this conversation was Vernal, UT.

I have been an intern with the Bureau of Land Management in Vernal now for several weeks. During that time, I was able to attend the conference in Monticello and see where Vernal lies in the big picture of native plant restoration.  When I first arrived in my new habitat, the local flora was covered with two feet of snow after what had been an unusual winter.  However, I have learned it is a botanically interesting region due to roughly fifty endemic species associated with local geology, especially the oil-shale.  The energy sector also finds this area very interesting. Consequently, there are abundant future reclamation needs. The anticipated demand for native seeds played a key role in Vernal’s place at the conference.

While the snow melted, I compiled data to answer the question of “what seed?” I have become acquainted with the local flora of the herbarium and their locations on a map. However, I got my first taste of the field today, checking on seedlings of a milkvetch species that is endemic to a particular bend of the Green River.  The tiny seedlings were exciting to find and identify, being that they are so unique to that location. The landscape was enamoring, and I look forward to a season of discovering its hidden gems.

A view of the Uinta Mountains

Budsage… enamoring landscape in the background

Think of a milkweed.

This is rush milkweed (Asclepias subulata).

Good. Now think of an insect that relies on milkweed.

Can you name an insect that depends on milkweed plants?

What did you think of?

That’s what I thought. Don’t be ashamed, I think of monarchs and milkweeds, too. The thing is, though, many other insects also have close relationship with members of the asclepias family. Let’s take a look at some of them.

The small milkweed bug (Lygaeus sp) is (you guessed it!) slightly smaller than the large one. It also displays a red X on its back as well as two small white dots.

From what I can tell, the large milkweed bugs (Oncopeltus sp) tend to be a littler more orange. Their markings also look like three large black horizontal bands rather than an X.

Milkweed bugs are in the order Hemiptera, meaning they are “true bugs”. I spotted another hemiptera chilling on a nearby milkweed, but that’s as far as I got in that identification game. Any ideas?

There were also a ton of tarantula hawk wasps (Pepsis or Hemipepsis sp) buzzing around.

Tarantula Hawk Wasps are up to 2 inches long with blue-black bodies and bright rust-colored wings.

Tarantula hawk wasps are so named because when it is time to reproduce, the female will sting a tarantula (permanently paralyzing it) and drag in into a pre-made brooding nest. The female wasp will then lay it’s egg(s) on the tarantula, I won’t go into the gory details here. Only the females hunt tarantulas, though, and only for reproduction. The adults feed off the nectar and flowers of milkweeds.

The tarantula hawk wasps were totally loving all the desert milkweed (Asclepias erosa)!

I photographed another insect which I believe is a wasp, but I’m not 100% sure. Any thoughts?

I think this is some sort of parasitoid wasp, but I’m no expert entomologist.

Yet another insect I couldn’t identify could be a bee (Order Hymenoptera) or a syrphid fly (Order Diptera). I don’t feel so bad about this one, though, because syrphid flies utilize Batesian mimicry (aka they exhibit the same coloring patterns as bees and wasps as a form of protection against predators).

Bee or Syrphid Fly?
Who could tell?

So, moral of the blog post: milkweeds are important to lots of insects. Let it be known.

A plethora of insect species depend on milkweeds (Asclepias sp) for survival.

From the bustle of the Chicago suburbs to the quiet, slow-paced town of Needles, CA, my first weeks of the CLM internship have been a period of great adjustment.  I’m glad to finally be away from the fast-paced days of Gurnee summers that are choked by traffic from the Six Flags amusement park and the mall.  Though not much goes on in close proximity to my residence, I enjoy my work with the Needles field office greatly.  My adviser Tom Stewart has been very helpful with my adjustment to the extreme temperatures and with navigating the region.  I am only beginning to get used to the temperatures that exceed 100 degrees Fahrenheit on a sunny, summer day.  A strategy to combat the summer heat has been starting work early.  My field work is done before the afternoon hours.

What I love about the field work is the many lizards I can see dashing across the rocky terrain, the Joshua trees that I had only seen in photographs and the dry climate.  I don’t mind warm weather, but extreme humidity has always bothered me.  Though it is not work-related, I also love the cheapness of produce at some stores in the region.  I have bragged to friends and family about the affordability of avocados, grapes and strawberries.  The only scary part of the work is the threat of rattlesnake bites.  Though I have yet to hear that fear-inducing rattle, I have made myself a promise to not listen to an iPod while collecting so that I do not foolishly stumble across an angry rattlesnake.

As far as work goes, most of my time thus far has been spent collecting seeds for SOS from key plant species such as white bursage, creosote, indian ricegrass, big galleta and more.  Proper and efficient seed collection from desert plants is a new skill that I am developing.  Luckily I spent a great deal of time with flora and fauna identification in college; thus, my understanding of desert wildlife is rapidly expanding.  I hope that my seed collecting can help to preserve plant species that are at risk due to pests, grazing animals, invasive species, pollution and other causes.  Some seeds are extremely easy to collect (white bursage) but some can be very time-consuming (creosote).  I have noticed that my first days of seed collection were awkward and confusing.  Since my most recent field work, I can confidently say that my skills are improving.

I am also using GPS to mark good locations for seed collection as well as animals that are spotted.  I found two desert tortoises (endangered species) on the same morning on my way to a desert spring.  Some employees at the office say that they have only seen one tortoise after years of working in the field!  Photographs of anything that catches my eye are taken at my leisure.

I am on the verge of working with water source management, bat surveys and other projects in the near future.  Until then, I will see you fellow interns at the Grand Canyon. 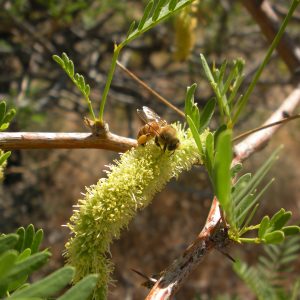 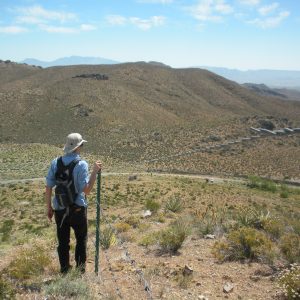 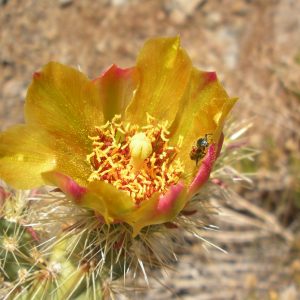 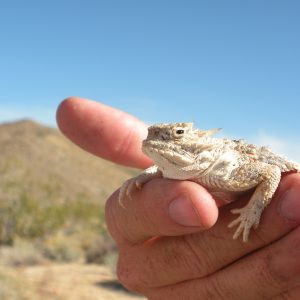 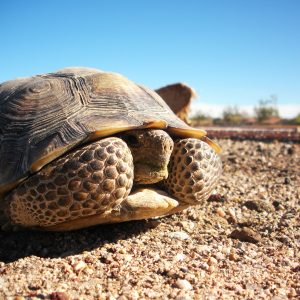 Yosemite falls-a little side trip I took; it was AMAZING!

Driving in from Vegas

Once you get outta town....

Carnegea gigantea, the giant saguaro, one of my favorite succulents!

Doin' work! Driving the pumps back after irrigating

Work with John is fun! I'm secretly trying to steal his job...

In the midst of the Sonoran desert lies the wonderful town of Yuma, AZ.  While the ‘Welcome to Yuma” sign boasts 122,000 residents, I am sure that must include the 50,000 snowbirds that are currently arriving.  Initially I was a bit nervous about moving to a small town from the bustling streets of Cincinnati, but I was amazed that all the stores/restaurants were the same as back home-with the exception of all the Mexican food, which has taken over all of my food groups.  Yuma is a fantastic place to live in the winter ( I love telling my frozen friends that I am still working on my tan!) but the summer was a true test of my love of hot weather (I arrived in July when temps were hitting 117-SCORCHING!).  According to the Guiness Book of World Records, Yuma is the sunniest place in the world-which I believe since in my four months here it has rained only twice and I could probably count on my two hands how many clouds I’ve seen.  California is about 5 minutes away and Mexico is about 15; there are more border patrol agents than police officers.  Another thing that struck me was the presence of agriculture EVERYWHERE in Yuma-it was the last thing I’d expect to see in the desert, but the soil is incredibly fertile due to the former floods of the Colorado River.  Add a little water and VIOLA- 90% of America’s winter crops-cantaloupe, watermelon, corn, cotton, citrus, dates, and more lettuce than you’ve seen in your entire life!  Overall I really like living in Yuma.  I thought it would be a lot harder moving somewhere all by my little ole self, but I was lucky to make friends quickly and have great co-workers too.

My main responsibility is to maintain a riparian restoration area next to the Colorado River.  3 days a week I bring irrigation pumps and filters to the area and pull water from the Colorado River to the trees via drip irrigation systems.  At first I thought it was ludicrous to have to water cottonwood and willow trees in the middle of the desert, but my mentor explained that it was prime habitat for an indigenous bird, the Willow Flycatcher.  I’m pretty sure Murphy’s law was created in reference to irrigation work; I can’t remember the last smooth day I’ve had where at least SOMETHING didn’t go wrong.  It can be incredibly frustrating, but I’ve become quite a handy gal and learned a lot about irrigation (especially in the aspect of repairs).

My other 35 hours a week are pretty random.  I’ve explored abandoned mine sites with the geologists (which can be really interesting/creepy), helped build kiosks for public lands, ridden up the scariest mountain road imaginable to check NEPA compliance, searched lakes for exotic invasive Quagga mussels, attended meetings for releasing endangered antelope into the Cibola Wildlife Refuge, planned a revegetation project for an old mining site and taken many classes pertaining to NEPA and BLM policies to name a few.  I have spent the vast majority of my time helping the horse and burro specialist survey our lands for grazing areas and burro overpopulation (basically, looking for poo).  We have recently set two burro traps in the glorious small town of Bard, CA, where the farmers were furious at the date-loving burros.  We have caught 5 burros thus far; they will be taken to a holding facility and eventually adopted out.  I have a newfound love of these little fellas and have vowed to adopt one someday…

I am excited to see what the last month of my internship brings, as it has been full of surprises thus far. I may even stick around another 5 months and enjoy a sunny and toasty winter in the desert…..